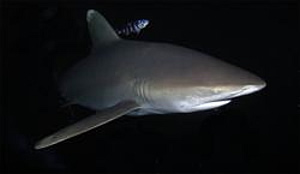 All Fins On Productions just completed a groundbreaking expedition to film and document the Oceanic Whitetip Shark in the Bahamas. The trip included the first ever planned, organized and photographed night dive with the oceanic whitetip without the protection of a shark cage.

Veteran diver and photographer Robert Cantrell was the organizer and leader of the endeavor. "We spent more than a year looking at a strategy for this dive. Common wisdom was that you don't do oceanics at night. When we first entered the water that night, these curious and bold sharks jostled us. It was intense. The resulting images are riveting to watch."

"I always wanted to try this, but never had the right team at the right time," says shark expedition head Jim Abernethy, an award-winning wildlife photographer and filmmaker. "Jacques Cousteau once called the oceanic whitetip shark the most dangerous of all sharks."

Emmy-award winning producer George C. Schellenger was also on board. He recently won an award for the new documentary "This is Your Ocean: Sharks." "One of the best ways to protect these animals is to show their true nature during the day and at night."

The team used a variety of cameras and a flying boat to document the journey and sharks in a way never before attempted. Accomplished filmmaker Joe Romeiro joined the team. He recently won an award for a tribute to legendary underwater explorer Jacques Cousteau. "It was one of the best experiences of my life. We had no idea what to expect at night."

The ocean voyage took the filmmakers to a remote location to the Eastern Bahamas, one of the last places in the world where people can reliably find oceanic whitetip sharks. Throughout history, survivors of shipwrecks and air disasters have encountered this shark. Most famously this included the USS Indianapolis at the end of World War II where some deaths were attributed to this shark. While once prolific worldwide, this shark has been hunted to near extinction over the last decade.

Jacques Cousteau called the oceanic whitetip sharks the "Lord of the Long Hands" due to their exceptionally long and white tipped fins and tendency to dominate other shark species. A documentary from the trip, tentatively titled "Sharks: Lord of the Long Hands," will be released later this year.

The shark was featured prominently in the 1970 documentary, "Blue Water, White Death," when a team, lead by Peter Gimble, became the first to dive with multiple oceanic whitetip sharks during the day. At night they never left the cage.

All Fins On, LLC is a new video production company based in Alexandria, VA headed by professional strategist, writer, and photographer Robert Cantrell. "Sharks: Lord of the Long Hands" is the first production for All Fins On, LLC, which has as a mission to bring back the film cinematography and adventure feel of the prominent documentaries produced by an earlier generation of underwater explorers. Robert Cantrell said, "In the present age of high-tech, it is important to remember the value of a compelling story."