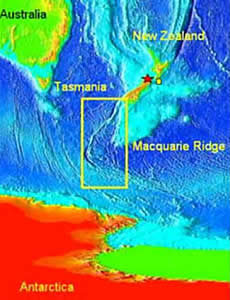 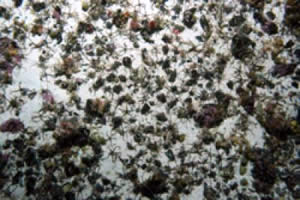 Census of Marine Life-affiliated scientists, plumbing the secrets of a vast underwater mountain range south of New Zealand, captured the first images of a novel "Brittlestar City" established against daunting odds on the peak of a seamount – an underwater summit taller than the world's tallest building.

Its cramped starfish-like inhabitants, tens of millions living arm tip to arm tip, owe their success to the seamount's shape and to the swirling circumpolar current flowing over and around it at roughly four kilometers per hour. It allows Brittlestar City's underwater denizens to capture passing food simply by raising their arms, and it sweeps away fish and other hovering would-be predators.

Discovery of this marine metropolis, announced today along with important new insights into seamount geology and physics, highlighted a month-long April expedition to survey the Macquarie Ridge aboard the Research Vessel Tangaroa of New Zealand's National Institute of Water & Atmospheric Research, host of the Census of Marine Life seamount programme, CenSeam. The voyage was largely funded by the New Zealand Foundation for Research, Science and Technology.

Formed at least 12.5 million years ago, Macquarie Ridge stretches 1,400 km south from New Zealand to just above the Antarctic Circle. A multi-disciplinary scientific team from New Zealand and Australia extensively sampled this intriguing ecosystem deep beneath waves familiar to fishing trawlers but rarely reached by scientists.

Macquarie Ridge is one of a few places where the Antarctic Circumpolar Current is detoured in its endless clockwise churn at the globe's southernmost latitudes – playing a vital part in the global ecosystem, merging and mixing waters of the Atlantic, Indian and Pacific Oceans.

Usually corals and sponges dominate seamount peaks, filtering food that arrives on the current. Biologists aboard the Tangaroa believe Brittlestar City is the first dense aggregation of another filter feeder, the brittlestar, ever found atop a seamount, and they credit the summit's shape and extraordinary current circumstances there, 750-meters above the ocean floor.

They photographed brown-black brittlestars numbering hundreds per square meter and estimate tens of millions of them populate the 100 square km flat top of the seamount.

Brittlestars are echinoderms, relatives to starfish, sea cucumbers, sea lilies, and sea urchins. The two brittlestar species observed were tentatively identified via photographs sent from the ship to the Museum Victoria in Melbourne, Australia.

There, taxonomist Tim O'Hara determined that the smaller, densely packed brown-black brittlestar species, found living arm tip to arm tip on the sand and cobble substrate of the peak, were likely Ophiacantha otagoensis or Ophiacantha fidelis.

"We were excited to see such a huge assemblage of brittlestars on the Macquarie Ridge seamount. Not only is it amazing to see a vast array of one type of organism but the implications of the find for our understanding of the relative uniqueness of seamount assemblages are potentially far-reaching." said ecologist Dr. Ashley Rowden of NIWA.

Piecing together the Brittlestar City ecosystem

The ship towed special sleds to collect seamount organisms. Thousands of specimens of all kinds were gathered from eight seamounts in over 30 sled collections and now fill almost 1,600 vials, jars and bags, to be sent from NIWA to taxonomists in New Zealand, Australia and overseas.

Full identifications may take many years. The eight biologists on board believe some species collected have never before been recorded in the region while some may be new to science.

A Deep Towed Imaging System (DTIS) vehicle, meanwhile, designed and constructed at NIWA by Peter Hill, was "flown" over the seafloor, snapping still photos and high definition video of the animals and their habitat. DTIS captured over 20 hours of video and thousands of photos of a part of Earth never seen before by humankind.

An abundance of deepwater cardinal fishes (Epigonus species) was found sheltering below a rock ledge on the seamount. In the lee of the rock, biologists believe, the fish could both conserve energy and access food.

Several Morid cods (family Moridae) were found in the folds of a large bubblegum coral (nearly two meters high, and likely hundreds of years old). These fish were also believed to be finding shelter from the current and perhaps benefiting in other ways from their close association with the coral.

Oceans worldwide contain an estimated 100,000 seamounts rising at least one km above the seabed; fewer than 200 have been sampled in any detail.

The odd shape and circumstances of Brittlestar City seamount

The Brittlestar City seamount displayed several geological faults affecting its shape and geomorphology. The odd rectangular edge of its southern peak was formed by the intersection of two perpendicular faults. Because the upper surface is relatively flat, experts believe it was once at sea level, or slightly submerged. The flat topography suggests wave erosion occurred during the last ice age 18,000 years ago, when sea level was low. Although the base of Brittlestar City seamount is 850 meters below surface, its peak is just 90 meters underwater.

Intrigued by the dynamics of the Antarctic Circumpolar Current as it passed over and through ridge gaps, physicists aboard the Tangaroa calculated its speed over the top of the seamount at a "rattling" 2 knots (about 4 km per hour).

"This current is estimated to be 110 to 150 times larger than all the water flowing in all the rivers of the world," says Dr. Mike Williams of NIWA. "In terms of the world's oceans, New Zealand sits right beside the motorway."

The Macquarie Ridge creates a strategic marine junction. "Understanding this current will shed light on how much water flows into the Pacific as opposed to continuing to circumnavigate Antarctica. This is important for understanding, and ultimately predicting, the impact of potential changes in the current on climate throughout the Southwest Pacific."

Data was collected from nine strings of metering instruments, anchored a year earlier in two gaps or "choke points" in the Ridge, through which the current squeezes. Experts were astonished to find the current had pushed the top instruments on some strings to a depth of one kilometer below the surface.

Scientists also took this ocean area's temperature and salinity readings for the first time since the 1960s, looking for climate-related changes, and obtained water samples to measure and compare levels of marine life nutrients.