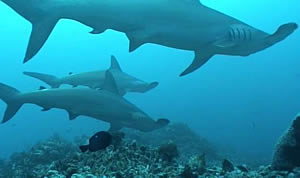 TOWNSVILLE, Queensland -- Sharks and manta rays gather in large numbers at special spots on the Great Barrier Reef and Osprey Reef for a regular “clean, wax and polish”.

Researchers at James Cook University set up cameras at a number of spots on the reef for set periods over five months to capture the sharks and manta rays being cleaned by smaller fish.

The researchers – Owen O’Shea, Professor Michael Kingsford and Associate Professor Jamie Seymour from JCU’s School of Marine and Tropical Biology and ARC Centre of Excellence for Coral Reef Studies – published their findings in the Marine and Freshwater Research journal of the CSIRO earlier this year.

“The objective of the study was to document the occurrence and frequency of visits by manta rays and sharks to cleaning stations in the northern Great Barrier Reef and at Osprey Reef in the Coral Sea,” Professor Kingsford said.

“The manta rays would cease all movement of their fins while in the cleaning stations,” he said. “Their gills were often flared and mouths open but never wide enough to suggest feeding.

“Several cleaner fish would then migrate upwards towards the animal and begin cleaning.”

The three researchers reported that occupancy of the cleaning station by rays on some occasions would last up to several hours and cleaning would be almost a continuous process during this time.

Professor Kingsford said that shark posturing was far more elaborate and included becoming almost vertical in most cleaning engagements. At other times, sharks would casually swim over the site and receive attention from cleaners.

“Sharks in the ‘vertical posture’ would typically approach with the tide before pointing head upward towards the surface upon reaching the cleaning station,” the researchers wrote.

“Pectoral fins pointed down, mouth open, gills flared and a rapid paddling of the caudal fin were typical behaviours.

“Depending on the strength of the current, each interaction would last anywhere between 5 and 10 seconds before the client would move away from the station and the cleaners would immediately retreat to the reef.

“The shark clients - in most cases - would swim back around into the current and repeat the process until cleaning had ceased.”

Professor Kingsford said large numbers of sharks gathered in the cleaning stations although not all were actively engaged in cleaning interactions.

“During the sessions captured by our cameras more than 1100 sharks were observed at Osprey Reef but no feeding or chasing was observed in any of the sightings,” he said.

“Both sides benefit from the interaction with the larger creatures cleansed of ectoparasites, mucus, dead and diseased tissue and scales and the smaller fish gaining a source of nutrition.”

The researchers said that strong tidal patterns were detected, with 49% of sharks and 59% of mantas engaging in cleaning interactions on ebb tides. Forty-four per cent of non-cleaned sharks were also observed on ebb tides.

Some manta rays were individually identified through ventral skin pigmentation to determine how often they returned to the site and three were seen more than once with repeat observations occurring within days.

Professor Kingsford said their research showed that because of the numbers turning up, some cleaning stations provided an great opportunity to further study the behaviour and ecology of sharks and rays.

Eds note: Video of the sharks and rays gathering at the cleaning stations is available.