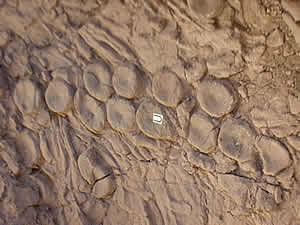 BOULDER, Colorado -- Long before whales, the oceans of Earth were roamed by a very different kind of air-breathing leviathan. Snaggle-toothed ichthyosaurs larger than school buses swam at the top of the Triassic Period ocean food chain, or so it seemed before Mount Holyoke College paleontologist Mark McMenamin took a look at some of their remains in Nevada. Now he thinks there was an even larger and more cunning sea monster that preyed on ichthyosaurs: a kraken of such mythological proportions it would have sent Captain Nemo running for dry land. McMenamin will be presenting the results of his work on Monday, 10 October at the annual meeting of the Geological Society of America in Minneapolis.

The evidence is at Berlin-Ichthyosaur State Park in Nevada, where McMenamin and his daughter spent a few days this summer. It's a site where the remains of nine 45-foot (14-meter) ichthyosaurs, of the species Shonisaurus popularis can be found. These were the Triassic's counterpart to today's predatory giant squid-eating sperm whales. But the fossils at the Nevada site have a long history of perplexing researchers, including the world's expert on the site: the late Charles Lewis Camp of U.C. Berkeley.

"Charles Camp puzzled over these fossils in the 1950s," said McMenamin. "In his papers he keeps referring to how peculiar this site is. We agree, it is peculiar."

Camp's interpretation was that the fossils probably represented death by an accidental stranding or from a toxic plankton bloom. But no one had ever been able to prove that the beasts died in shallow water. In fact more recent work on the rocks around the fossils suggest it was a deep water environment, which makes neatly arranged carcasses even more mysterious.

This question -- shallow or deep ocean death -- is what attracted McMenamin to the site.

"I was aware that anytime there is controversy about depth, there is probably something interesting going on," McMenamin said. And when they arrived at the remote state park and started looking at the fossils, McMenamin was struck by their strangeness.

"It became very clear that something very odd was going on there," said McMenamin. "It was a very odd configuration of bones."

First of all, the different degrees of etching on the bones suggested that the shonisaurs were not all killed and buried at the same time. It also looked like the bones had been purposefully rearranged. That it got him thinking about a particular modern predator that is known for just this sort of intelligent manipulation of bones.

"Modern octopus will do this," McMenamin said. What if there was an ancient, very large sort of octopus, like the kraken of mythology. "I think that these things were captured by the kraken and taken to the midden and the cephalopod would take them apart."

In the fossil bed, some of the shonisaur vertebral disks are arranged in curious linear patterns with almost geometric regularity, McMenamin explained.The proposed Triassic kraken, which could have been the most intelligent invertebrate ever, arranged the vertebral discs in double line patterns, with individual pieces nesting in a fitted fashion as if they were part of a puzzle.

Even more creepy: The arranged vertebrae resemble the pattern of sucker discs on a cephalopod tentacle, with each vertebra strongly resembling a coleoid sucker. In other words, the vertebral disc "pavement" seen at the state park may represent the earliest known self portrait.

But could an octopus really have taken out such huge swimming predatory reptiles? No one would have believed such a tale until the staff of the Seattle Aquarium set up a video camera at night a few years ago to find out what was killing the sharks in one of their large tanks. What they were shocked to discover was that a large octopus they had in the same tank was the culprit. The video of one of these attacks is available on the web to anyone who uses the search terms "shark vs octopus."

"We think that this cephalopod in the Triassic was doing the same thing," said McMenamin. Among the evidences of the kraken attacks are many more ribs broken in the shonisaur fossils than would seem accidental and the twisted necks of the ichthyosaurs. "It was either drowning them or breaking their necks."

Of course, it's the perfect Triassic crime because octopuses are mostly soft-bodied and don't fossilize well. Only their beaks, or mouth parts, are hard and the chances of those being preserved nearby are very low. That means the evidence for the murderous Kraken is circumstantial, which may leave some scientists rather skeptical. But McMenamin is not worried.