How Many Genes Does it Take to Learn? Lessons from Sea Sugs

Coastal Barrier Island Researchers Learn Lessons From Ike Destruction; 'There Is No Answer Yet'

To Punish Or Not To Punish: Lessons From Reef Fish And Saber-Tooth Blennies

NOAA Scientists Conduct Shark Survey Off US East Coast; 'We Still Have A Lot To Learn' 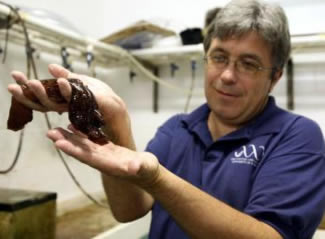 Leonid Moroz, a professor of neuroscience and zoology, has found that gene sequences in a simple marine snail

GAINSVILLE, Florida -- Scientists analyzing the genomics of a marine snail have gotten an unprecedented look at brain mechanisms, discovering that the neural processes in even a simple sea creature are far from sluggish.

At any given time within just a single brain cell of sea slug known as Aplysia, more than 10,000 genes are active, according to scientists writing in Friday's (Dec. 29, 2006) edition of the journal Cell. The findings suggest that acts of learning or the progression of brain disorders do not take place in isolation - large clusters of genes within an untold amount of cells contribute to major neural events.

"For the first time we provide a genomic dissection of the memory-forming network," said Leonid Moroz, a professor of neuroscience and zoology at the University of Florida Whitney Laboratory for Marine Bioscience. "We took advantage of this powerful model of neurobiology and identified thousands of genes operating within a single neuron. Just during any simple event related to memory formation, we expect differences in gene expression for at least 200 to 400 genes."

Researchers studied gene expression in association with specific networks controlling feeding or defensive reflexes in the sea slug. To their surprise, they identified more than 100 genes similar to those associated with all major human neurological diseases and more than 600 genes controlling development, confirming that molecular and genomic events underlying key neuronal functions were developed in early animal ancestors and remained practically unchanged for more than 530 million years of independent evolution in the lineages leading to men or sea slugs.

Moroz and his collaborators uncovered new information that suggest that gene loss in the evolution of the nervous system is as important as gene gain in terms of adaptive strategies. They believe that a common ancestor of animals had a complex genome and different genes controlling brain or immune functions were lost independently in different lineages of animals, including humans.

Until now, scientists have been largely in the dark about how genes control the generation of specific brain circuitry and how genes modify that circuitry to enable learning and memory. For that matter, little is known about the genes that distinguish one neuron from the next, even though they may function quite differently.

Molecular analyses of Aplysia neuronal genes are shedding light on these elusive processes. In 2000, senior author Eric Kandel, M.D., of Columbia University in New York shared the Nobel Prize in Physiology or Medicine for his work using Aplysia as a model of how memories are formed in the human brain.

Despite its simple nervous system - Aplysia has about 10,000 large neurons that can be easily identified, compared with about one hundred billion neurons in humans - the animal is capable of learning and its brain cells communicate in many ways identical to human neural communication.

In the new findings, scientists identified more than 175,000 gene tags useful for understanding brain functions, increasing by more than 100 times the amount of genomic information available for study, according to Moroz and 22 other researchers from UF and Columbia University. More than half of the genes have clear counterparts in humans and can be linked to a defined neuronal circuitry, including a simple memory-forming network.

"In the human brain there are a hundred billion neurons, each expressing at least 18,000 genes, and the level of expression of each gene is different," said Moroz, who is affiliated with UF's Evelyn F. and William L. McKnight Brain Institute and the UF Genetics Institute. "Understanding individual genes or proteins is important, but this is a sort of molecular alphabet. This helps us learn the molecular grammar, or a set of rules that can control orchestrated activity of multiple genes in specific neurons. If we are going to understand memory or neurological disease at the cellular level, we need to understand the rules."

Scientists also analyzed 146 human genes implicated in 168 neurological disorders, including Parkinson's and Alzheimer's diseases, and genes controlling aging and stem-cell differentiation. They found 104 counterpart genes in Aplysia, suggesting it will be a valuable tool for developing treatments for neurodegenerative diseases.

"The authors have assembled a tremendous amount of data on gene transcripts associated with neuronal signaling pathways in Aplysia that sheds new light on evolutionary relationships of this very ancient and highly successful marine animal," said Dennis Steindler, Ph.D., executive director of UF's McKnight Brain Institute, who did not participate in the research. "A very important part of this study is the discovery of novel genes not formerly associated with the mollusk genome that include many associated with neurological disorders."

The findings are especially important for scientists using mollusks in experimental systems, according to Edgar Walters, Ph.D., a professor of integrative biology and pharmacology at the University of Texas Medical School at Houston, who was not involved in the research.

"Few animals other than Aplysia allow scientists to relate a molecular pathway directly to the function of a cell, all in context with an animal's behavior," Walters said. "In a mammal, it's hard to identify and manipulate a single cell and know what its function is. With Aplysia, there is direct access to whatever cell you're interested in with just a micropipette. As a scientist who wants to know which molecules are present in Aplysia for experimental manipulation, I am very happy to see this paper