San Francisco Bay-Area Man Ready to Fish in His 'Boatercycle' 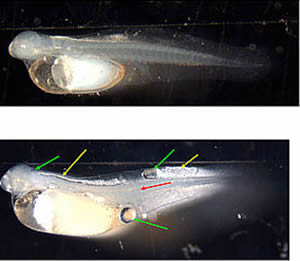 DAVIS, California -- Striped bass in the San Francisco Estuary are contaminated before birth with a toxic mix of pesticides, industrial chemicals and flame retardants that their mothers acquire from estuary waters and food sources and pass on to their eggs, say UC Davis researchers.

Using new analytical techniques, the researchers found that offspring of estuary fish had underdeveloped brains, inadequate energy supplies and dysfunctional livers. They grew slower and were smaller than offspring of hatchery fish raised in clean water.

"This is one of the first studies examining the effects of real-world contaminant mixtures on growth and development in wildlife," said study lead author David Ostrach, a research scientist at the UC Davis Center for Watershed Sciences. He said the findings have implications far beyond fish, because the estuary is the water source for two-thirds of the people and most of the farms in California.

"If the fish living in this water are not healthy and are passing on contaminants to their young, what is happening to the people who use the water, are exposed to the same chemicals or eat the fish?" Ostrach said.

"We should be asking hard questions about the nature and source of these contaminants, as well as acting to stop the ongoing pollution and mitigate these current problems."

The new study, published online Nov. 24 by the journal Proceedings of the National Academy of Sciences, is one of a series of reports by Ostrach and UC Davis colleagues on investigations they began in 1988. Their goal is to better understand the reasons for plummeting fish populations in the estuary, an enormous California region that includes the Sacramento-San Joaquin River Delta and San Francisco Bay.

The estuary is one of the world's most important water supplies for urban use and agriculture, and is also one of the most contaminated aquatic ecosystems.

The ominous decline in estuary populations of striped bass, delta smelt, longfin smelt and threadfin shad, named the "pelagic organism decline," or POD, by the region's environmental scientists, was first reported at the turn of the century and has continued to worsen through 2007.

Ostrach's lab at UC Davis is part of the multi-agency POD research team and charged with understanding contaminant effects and other environmental stressors on the entire life cycle of striped bass.

Studies of striped bass are useful because, first, they are a key indicator of San Francisco Estuary ecosystem health and, second, because contaminant levels and effects in the fish could predict the same in people. For example, one of the contaminants found in the fish in this study, PDBEs, have been found in Bay Area women's breast milk at levels 100 times those measured in women elsewhere in the world.

The new study details how Ostrach and his team caught gravid female striped bass in the Upper Sacramento River, then compared the river fishes' eggs and hatchlings (larvae) to offspring of identical but uncontaminated fish raised in a hatchery.

PBDEs (polybrominated diphenyl ethers) are widely used flame retardants; PCBs (polychlorinated biphenyls) are chemicals once used in making a range of products, from paper goods to electric transformers; and the pesticides detected include some currently widely used in agriculture, such as chlorpyrifos and dieldren, and others banned decades ago, such as DDT.

These compounds are known to cause myriad problems in both young and adult organisms, including skeletal and organ deformities and dysfunction; changes in hormone function (endocrine disruption); and changes in behavior. Some of the effects are permanent. Furthermore, Ostrach said, when the compounds are combined, the effects can be increased by several orders of magnitude.

Since 1988, the Ostrach laboratory has received more than $1.5 million in funding from agencies working on Bay-Delta ecosystem problems and expects to conduct an additional $1.5 million worth of studies in the next few years. Key funders include the UC Davis School of Veterinary Medicine, California's Department of Water Resources, State Water Resources Control Board and Department of Fish and Game, San Francisco Estuary Institute and the U.S. Fish and Wildlife Service.