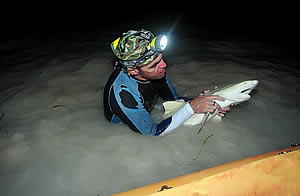 Rafael Tavares on a research trip, preparing to tag a juvenile lemon shark in the lagoons of Los Roques. Credit: Maximiliano Bello

WASHINGTON, D.C. -- Venezuela set forth a series of measures this week to protect sharks within its waters. Most significantly, commercial shark fishing is now prohibited throughout the 2,211 square kilometers (854 square miles) of the Caribbean Sea that make up the popular Los Roques Archipelago, whose pristine beaches and coral reefs make it a diving and fishing attraction.

Scientists have identified Los Roques, located about 128 kilometers (80 miles) off the Venezuelan coast, as an important breeding ground and nursery for populations of several species of sharks, including the lemon shark and the Caribbean reef shark.

"Our research has found that newborn sharks in the mangroves and cays of Los Roques migrate throughout the Caribbean and Atlantic Ocean," said Rafael Tavares, an expert with Instituto Nacional de Investigaciones AgrÃ­colas (INIA), Venezuela, who has researched sharks in the region for nearly 20 years. "These new, far-reaching protections would not be possible without the support of the Los Roques community, especially the local fishermen."

The new regulation also prohibits the practice of shark finning (cutting off the fins and dumping the body overboard at sea) and mandates that all of these animals caught in Venezuelan waters must be brought to port with their fins naturally attached.

"Venezuela's decision to prohibit shark finning means that it now joins the rest of the countries of South America, North America and Central America in banning this wasteful practice," said Jill Hepp, manager of global shark conservation at the Pew Environment Group. "Combined with the breeding ground safe haven in Los Roques and Las Aves, this is the latest step in the growing global movement to save these magnificent animals."

Sharks are highly susceptible to overfishing because of biological characteristics such as long life, low birthrate, and few offspring. It is estimated that up to 73 million are killed annually for their fins, primarily due to increased demand for shark fin soup.