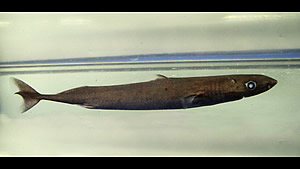 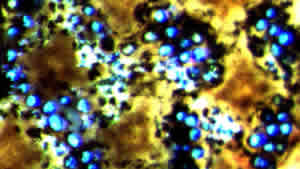 Some sharks deserve a blood curdling reputation, but not the diminutive smalleye pygmy shark (Squaliolus aliae). Reaching a maximum length of only 22cm, the tiny animals are more likely to be on someone else's menu. Silhouetted against weak light penetrating from the surface, the tiny sharks should be most at risk from predators approaching from below. However, Julien Claes from Université catholique de Louvain, Belgium, explains that the minute sharks have evolved a handy trick. Their undersides are covered in tiny light-emitting photophores that probably fill in their telltale silhouettes. Adding that the distantly related velvet belly lantern sharks have adopted this luminous tactic for camouflage and communication, Claes and colleague Jérôme Mallefet were curious to discover whether Pygmy sharks had acquired bioluminescence from the same origin, or developed the ability independently. The duo publish their discoveries that pigmy sharks glow for camouflage and that they probably share an ancestor in common with lantern sharks because they use similar mechanisms to regulate their glows in The Journal of Experimental Biology at http://jeb.biologists.com.

Teaming up with Hsuan-Ching Ho from the National Dong Hwa University, Taiwan, the scientists went trawling for smalleye Pygmy sharks off the Taiwanese coast. Back in the lab, the team collected samples of the fish's skin, injected substances – ranging from neurotransmitters to hormones, which are known to regulate a wide range of biological processes – and waited to see whether the skin began glowing. Recording the time when the skin started producing light, and the maximum intensity and duration of light production, the team discovered that the hormone melatonin – which stimulates light production in the lantern sharks – made the smalleye pygmy shark's skin glow, while the neurotransmitters – which regulate light production in deep-sea bony fish – had no effect at all.

However, when the team applied prolactin to the glowing skin, they were in for a surprise: the glow faded. Instead of stimulating 30-min-long bursts of glowing light – as it does for lantern sharks – prolactin dimmed the sharks' glow, which, according to Claes, is intriguing from two perspectives.

He explains that in addition to using continual bioluminescence for camouflage, lantern sharks communicate using bursts of glowing of light from patches of skin on the pectoral and pelvic fins. They regulate this specific form of bioluminescence with the hormone prolactin. Having discovered that smalleye pigmy sharks use prolactin to inhibit light emission and that the photophores were restricted to the shark's lower surface, Claes and Mallefet concluded that instead of using bioluminescence for communication, the smalleye pigmy sharks use it purely for camouflage.