Researchers: How Can A Colorblind Animal Change Its Colors To Blend Into The Background? 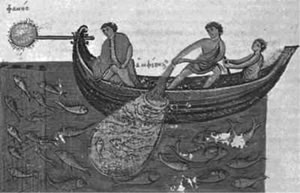 This Byzantine image from the 11th century shows night fishing with a lamp and a net. Credit: International Journal of Nautical Archaeology / CoML 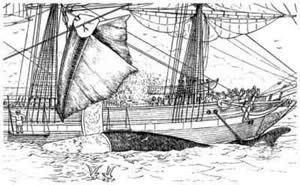 This reproduction from an 1887 paper by A. Howard Clark shows the processing of a right whale carcass. Credit: HMAP / CoML

-- Before oil hunters in the early 1800s harpooned whales by the score, the ocean around New Zealand teemed with about 27,000 southern right whales - roughly 30 times as many as today - according to one of several astonishing reconstructions of ocean life in olden days to be presented at a Census of Marine Life conference May 26-28.

Using such diverse sources as old ship logs, literary texts, tax accounts, newly translated legal documents and even mounted trophies, Census researchers are piecing together images - some flickering, others in high definition - of fish of such sizes, abundance and distribution in ages past that they stagger modern imaginations.

They are also documenting the timelines over which those giant marine life populations declined.

Maria Lucia De NicolÃ² of the UniversitÃ  di Bologna, meanwhile, has established that new fishing boats and equipment invented in the 1500s made it possible to venture from coastal to deep sea fishing. The real revolution in marine fishing, she says, happened in the mid-1600s when pairs of boats began dragging a net.

Appraising modern marine life through the narrow window of observations during recent decades "skews perceptions," says Andy Rosenberg of the University of New Hampshire, a leader of the Census' History of Marine Animal Population (HMAP) project and chair of the conference.

In most places human-caused changes to marine ecosystems occurred over millennia while reliable information is often available for just the last few centuries at best. In New Zealand, however, which was first settled by fewer than 300 eastern Pacific islanders around 1280 AD, there is a comparatively short and continuous record of human impacts on the marine environment, including whaling for southern right whales.

This short and well-documented history allows researchers to quantify the full scope of change in at least this one marine ecosystem, from before human presence to the present day, and makes the findings more relevant to policy makers, who plan to use the results as a realistic baseline against which the current and future status of the marine ecosystem can be gauged.

And they say with 95% statistical confidence that southern right whales numbered between 22,000 and 32,000 in the early 1800s, declining rapidly once whaling began. By 1925, perhaps as few as 25 reproductive females survived. Today a remnant -- and hopefully recovering - of 1,000 animals is being studied around sub-Antarctic islands south of New Zealand.

Says Alison MacDiarmid, a New Zealand government scientist who organized the work: "These findings point up the need to re-examine the role southern right whales once played both as a grazer of zooplankton and prey, especially during calving close inshore, for killer whales and great white sharks."

International scientists arriving in Vancouver for the second Oceans Past conference (www.hmapcoml.org/oceanspast, May 26-28, hosted by the University of British Columbia), will share such other surprises as these:

Says Ian Poiner, Chair of the Census Scientific Steering Committee: "Joni Mitchell once famously sang that 'you don't know what you've got 'til it's gone.' But when it comes to marine life, in many cases we're only just starting to fully realize what the planet once had."

"The insights emerging from this research of the past provide a new context for contemporary ocean management. Understanding the magnitude and drivers of change long ago is essential to accurately interpret today's trends and to make future projections."

Dr. Poiner adds that establishing environmental history in mainstream marine science will be one of the Census' enduring legacies.

Scientists involved in the research hail from many disciplines, including palaeontology, archaeology, history, fisheries and ecology.

Demonstrating one of many novel research techniques, HMAP Caribbean researcher Loren McClenachan of the Scripps Institution of Oceanography, compared photos of 13 groups of "trophy" reef fish landed by Key West-area sport fishermen between 1956 and 2007.

They revealed that average fish size shrank from an estimated 20 kg to 2.3 kg and that the mix of species changed greatly.

From 1956 to 1960, large groupers and other large predatory fish dominated the catches, including sharks that averaged nearly two meters long.

By contrast, small snappers with an average length of 34.4 cm dominated catches in 2007.

HMAP researchers are also looking closely into the history near Atlantic shores, assessing changes in coastal biodiversity over time.

To illuminate patterns of change by seeing what used to be, project scientists are subjecting rich historical data from five countries to modern sampling and analysis methods, testing the hypothesis that biodiversity has suffered more at sea than on land.

Lessons also from past recoveries

"Most histories of successful marine recoveries are found among mammals and birds, but cases involving marine reptiles and fish also exist. Only in a few cases, however, did they fully recover their former abundance," says researcher Heike Lotze of Canada's Dalhousie University.

Lotze points to hopeful examples of recoveries - sea otters of western North America, elephant seals of Guadalupe, an island off the coast of Baja California, and the Pacific gray whales that roam the American coast, for example - and the causes behind them.

"In the past, some combination of reduced or banned exploitation, pollution controls or habitat protection, especially of breeding colonies and feeding grounds, propelled recovery" she says.

Recovery potential can depend on the magnitude of depletion, the life history of the animals, and the time since collapse. Long-lived marine animals rebound more slowly than short-lived species. Species diversity and food webs have also been identified as important drivers for recovery. And where species have disappeared, their reintroduction by humans can help, says Lotze.

"Forecasting and backcasting are two sides of the same coin," says Jesse Ausubel, Program Director of the Census at the Alfred P. Sloan Foundation. "Analytic tools developed by ecologists to predict future abundance have been adapted to reconstruct histories of marine life."

"HMAP's evidence includes a variety of items such as old restaurant menus, whalebone buttons, logbooks and lore, paintings and pavements, isotopes and ice. HMAP researchers keep extending the limits of knowledge by finding new ways to make the past visible. They help us to lift self-imposed blinders on what constitutes useful source material," he adds.

He notes a text written in Sicily in 1153 describing the seas of the North Atlantic as having "animals of such great size that the inhabitants of the islands use their bones and vertebrae in place of wood to build houses. They make hammers, arrows, spears, knives, seats, steps, and in general every sort of thing elsewhere made of wood."

"The History of Marine Animal Populations project gives a head start of decades and even centuries in anticipating trends - both good and bad. Integration of this information will extend databases to help perceive important patterns over larger areas, longer eras and covering more forms of life more reliably."

Concludes Poul Holm, Professor at Trinity College Dublin and global chair of the HMAP project: "While the history of marine animal populations has been one of the great unknowns, recent advances in scientific and historical methodology have enabled HMAP to expand the realm of the known and the knowable."

"We now know that the distribution and abundance of marine animal populations change dramatically over time. Climate and humanity forces changes and while few marine species have gone extinct, entire marine ecosystems may have been depleted beyond recovery. Understanding historical patterns of resource exploitation and identifying what has actually been lost in the habitat is essential to develop and implement recovery plans for depleted marine ecosystems."