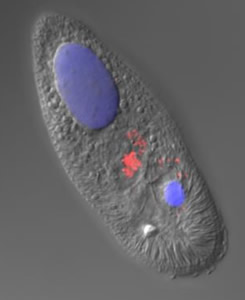 A confocal laser scanning image of Ich showing intracellular bacteria in red and the Ich macronucleus and micronucleus in blue. credit UGA

ATHENS, Georgia -- Researchers from the University of Georgia College of Veterinary Medicine have made an "unexpected" dual discovery that could open new avenues for treating Ichthyophthirius multifiliis, or "Ich", a devastating single-celled protozoan parasite that commonly attacks freshwater fish.

Five researchers from the College's Department of Infectious Diseases worked on the project in collaboration with two researchers from the Department of Microbiology and Immunology at Cornell University College of Veterinary Medicine, and a researcher from the J. Craig Venter Institute, a DNA sequencing laboratory; their initial intent was to map the genome of Ich. Their study is published in the December 2009 issue (Issue 23) of "Applied and Environmental Microbiology," with an image from the study donning the cover.

It was the presence of Rickettsia DNA sequences found in the initial genome data that provided scientists with a clue that bacteria might live inside of Ich. Intracellular bacteria have been described in free-living ciliates such as Paramecium, but never in Ich, which is an obligate parasite.

"It was unexpected; it was stunning to find bacteria in Ich. And, it came about due to the genome sequencing," said Harry W. Dickerson, a co-author who has been studying Ich at the Veterinary College for more than 20 years. Dickerson is also a member of the University of Georgia's Center for Tropical and Emerging Global Diseases, which has a focus on parasitic diseases, primarily of humans. "Ich occurs world-wide and is one of the most common protozoon pathogens of freshwater fish. It is easily recognized by most aquarists, and fish farmers often are confronted with massive epizootic outbreaks to devastating economic effect."

Ich (which causes "white spot disease") is a ciliated protozoan parasite that bores into the skin and gills of fish where it feeds, destroying tissue and thereby blocking exchange of oxygen and carbon dioxide, usually leading to death of the host. Each parasite grows on the fish from roughly 40 microns, which cannot be seen by the naked eye, to approximately one millimeter in diameter, which can easily be seen as a white spot. The parasites leave the fish in about 5-6 days (a ciliate with its typical large nucleus is shown in the image). Each cell then divides multiple times to produce up to 1000 more infective organisms. The entire life cycle takes about 6-7 days. With subsequent rounds of infection the number of parasites continues to increase, and each wave of re-infection becomes more deadly than the last. By the second or third re-infection the fish population is usually overwhelmed and fish begin to die. Fish that survive mild infections can develop immunity.

There are currently no drugs or chemicals that kill Ich while it resides in the fish skin or gills; they can only kill Ich when the parasite is in the water, and therefore all current therapies require a cyclical re-treatment program.

The first major outbreak of Ich in North America was recorded in 1898 at the Chicago World Fair. Ich is a well-known problem for aqua-culturists, aquarium owners, pond owners, hobbyists and retailers of freshwater fish. People and birds can also carry the parasite, unknowingly, from pond to pond.

"Work to sequence the genome of this parasitic protozoan unexpectedly revealed that bacterial DNA sequences were also present," noted Craig Findly, one of the College's researchers on the project. "Following up this discovery led to our demonstration that two new species of intracellular bacteria use Ich as their host. We now need to determine if these intracellular bacteria play a role in infection."

Next, the researchers will try to determine what role the two organisms play in the physiology of Ich and whether Ich remain infective if the bacteria are removed. The scientists hope their finding takes them a step closer to developing better treatments for Ich.