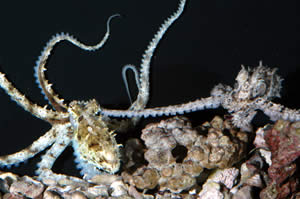 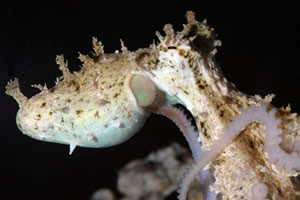 BERKELEY, California -- For decades, scientists have viewed octopuses as unromantic loners, with mating habits nearly devoid of complex behavior. But new research from the University of California, Berkeley, has found that at least one species of octopus engages in such sophisticated lovemaking tactics as flirting, passionate handholding and keeping rivals at arms' length.

"This is not a unique species of octopus, which suggests others behave this way," said Roy Caldwell, a professor of integrative biology at UC Berkeley and co-author of the study.

In the wild, researchers observed macho octopuses that didn't just mate with the first female that crossed their path. Many picked out a specific sex partner and jealously guarded her den for several days, warding off rivals to the point of strangling them if they got too close. When flirting or fighting, they would signal their manliness by displaying striped body patterns.

Researchers also saw small "sneaker" males that moved in on unsuspecting conquests by masquerading as females. They did this by swimming low to the ground in feminine fashion and not displaying their "male" brown stripe. Plus, for the males, size really mattered: "If you're going to spend time guarding a female, you want to go for the biggest female you can find because she's going to produce more eggs," Caldwell said. "It's basically an investment strategy."

Caldwell said most of what we know about octopuses comes from laboratory observations of just a few species that are summarized in books such as "Cephalopod Behavior" by Roger Hanlon and John Messenger (Cambridge University Press, 1996).

Because they are such bashful sea creatures, octopuses' mating rituals have been hard to get a handle on. "They're obsessively secretive, solitary and pretty spooky," Caldwell said. "If you watch them, they watch you back. It's hard to study them."

So, when UC Berkeley graduate Christine Huffard, now a postdoctoral fellow at the Monterey Bay Aquarium Research Institute in Moss Landing, Calif., discovered a thriving community of Abdopus aculeatus while doing her Ph.D. fieldwork in Sulawesi, she was overjoyed.

"Each day in the water, we learned something new about octopus behavior, probably like what ornithologists must have gone through after the invention of binoculars," said Huffard, the study's lead author. "We quickly realized that Abdopus aculeatus broke all the 'rules' â doing the near opposite of every hypothesis we'd formed based on aquarium studies."

There are nearly 300 species of octopus in the world, ranging from the giant octopus in the Pacific Ocean to the tiny Octopus wolfi in the tropics. Mating is literally an octopus's life's work and can take place several times a day once the animal reaches sexual maturity. It usually begins with the male octopus poking the female with his long, flexible, hectocotylus arm and then slipping it into her mantle cavity.

Once the sperm packet has been deposited, the female retires to her den and lays tens of thousands of eggs, which she weaves into strings and attaches to the roof of her underwater dwelling. She keeps the eggs clean by blowing jets of water on them and is unable to leave her den to forage for food during this time. After about a month, the eggs hatch and the weakened mother octopus dies. The father also dies within a few months of mating, leaving the newborns to fend for themselves.

"It's not the sex that leads to death, Huffard said. It's just that octopuses produce offspring once during a very short lifespan of a year. And as the research team discovered, that once-in-a-lifetime lovemaking session is much more than just arm wrestling.

"This is the first study to show a level of sophistication not previously known in the sexual behavior of an octopus," Caldwell said. "We got it wrong before, and what this tells us is that we need to do a lot more fieldwork."