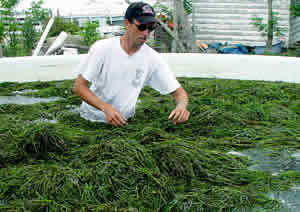 GLOUCESTER POINT, Virginia -- A team of 21 researchers from 11 nations, including professor Robert "JJ" Orth of the Virginia Institute of Marine Science, has completed the first-ever study of the risk of extinction for individual seagrass species around the world.

The 4-year study, requested by the International Union for the Conservation of Nature (IUCN), shows that 10 of the 72 known seagrass species (14%) are at an elevated risk of extinction, while 3 species qualify as endangered.

The authors caution that loss of seagrass species and seagrass biodiversity will seriously impact marine ecosystems and the human populations that depend on the resources and ecosystem services that seagrasses provide. A 1997 study placed the value of those services at US$34,000 per hectare per year. Seagrasses offer critical habitat for aquatic life, clear the water by reducing wave action, absorb excess nutrients, and reduce shoreline erosion.

The study, in the online issue of Biological Conservation, determines the likelihood of extinction for each of the world's 72 species of seagrass using the categories and criteria of the IUCN's Red List of Threatened Species.

The IUCN Red List is the most widely accepted method for assessing a species' probability of extinction and its conservation status on a global scale. Red List categories run from "least concern" to "near threatened," "vulnerable," "endangered," "critically endangered," "extinct in the wild," and "extinct."

Placement in a category reflects a species' abundance, reproductive rate, geographic range, and other such factors. A "data deficient" category holds species for which there is inadequate information to assess extinction risk based on distribution, population status, or both. The researchers placed 9 seagrass species (12.5%) in that category.

The researchers listed 48 species (67%) in the "Least Concern" category, including eelgrass (Zostera marina), the most common seagrass in lower Chesapeake Bay. Orth notes, however, that most of these speciesâincluding eelgrassâare declining in their area of coverage. (Data from VIMS' annual aerial survey shows that eelgrass is absent from one-half of its former range and continues to decline in the areas where it remains).

Orth says that eelgrass was listed as a species of least concernâdespite severe declines in Chesapeake Bay, San Francisco Bay, and other parts of its rangeâbecause it is still widespread elsewhere and thrives in less developed and clear-water areas. He cites his team's successful efforts to replant eelgrass in the seaside bays of Virginia's Eastern Shore as evidence of the species' ability to rebound quickly given clear and cool water.

VIMS scientists have been restoring eelgrass to Virginia's seaside bays since 1997. Their efforts have resulted in the largest and most successful seagrass restoration project in the world, with 38 million eelgrass seeds broadcast onto 309 acres during the last decade. As of 2010, these restored sites have spread naturally to more than 4,200 acres