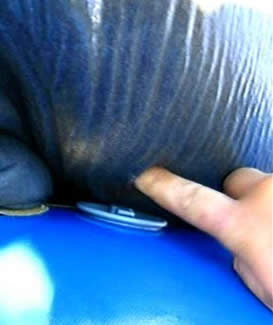 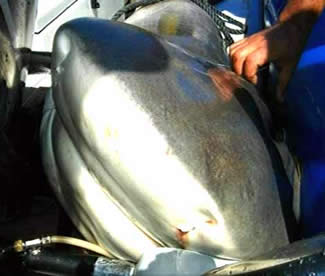 "Why kill such a beautiful animal?" 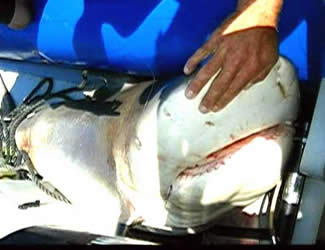 SHELLY BEACH, South Africa -- For those of you who don’t know Quasimodo, Quasimodo was a very popular Zambezi shark (also known as Bull Shark) estimated to be about 70 years old and described as a “friendly” shark and regular diving companion of divers from all over the world. She has sadly been found shot dead at the bottom of the Protea Banks Reef of Shelly Beach in South Africa by a group of UK divers and a team from African Dive Adventures on 27th April 2006.

Mike Carvalho, one of the divers who found Quasimodo recently contacted Project AWARE Foundation (International) to share this sad news and very upsetting experience. “She was named Quasimodo because she had a recognisable bend on its dorsal fin. She was a beautiful creature, and was not a threat to humans. Why kill such a beautiful animal?” said Mike. Mike was fortunately running a camera test when his dive buddy Greg Poustie noticed a distant milk-white shape against the rocky seabed. As they approached the almost surreal object, it became increasingly apparent that this was part of a very large sea creature. Having identified the shark and marked its position, the divers returned to their boat. Another dive team lead by Trevor Krull from African Odyssea and one of the founders of Sharklife was just arriving at that same location for their morning dive. After further examination Trevor took the decision to lift the huge creature to the surface and bring it to shore. A deep puncture wound on top of the shark head was quickly discovered. The death was obviously no accident. Mike and his fellow divers were outraged by the tragedy. They immediately alerted the police and the KZN Wildlife. The shark was taken to the Durban Sharks Board for post mortem investigation and a report was filed with the local police. The Port Shepstone Organised Crime Unit investigated a charge of killing of a fish with an explosive device in contravention of the Marine Living Resources Act.

Dive operators have witnessed the drastic decline in the Zambezi shark population on Protea Banks. One could expect to see up to 20 or more individual sharks on a single dive when diving began there in 1994. In 2005 there were estimated to be 7 individual Zambezi's left on the reef including Quasimodo. Each of these sharks are a national treasure attracting thousands of divers each year. The death of Quasimodo is not only a sad loss for the whole diving community but also for the whole reef ecology. To voice your protest or support the Sharklife battle to protect Zambezi Sharks grant@sharklife.co.za or visit the Sharklife website.