New Computer Program Promises To Save The Whales; 'there Is Little Data On The Number Of Collisions' 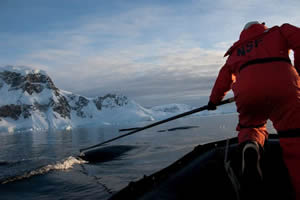 DURHAM, South Carolina -- Scientists have observed a "super-aggregation" of more than 300 humpback whales gorging on the largest swarm of Antarctic krill seen in more than 20 years in bays along the Western Antarctic Peninsula.

The sightings, made in waters still largely ice-free deep into austral autumn, suggest the previously little-studied bays are important late-season foraging grounds for the endangered whales. But they also highlight how rapid climate change is affecting the region.

The Duke University-led team tracked the super-aggregation of krill and whales during a six-week expedition to Wilhelmina Bay and surrounding waters in May 2009. They published their findings today in the online science journal PLoS ONE.

"Such an incredibly dense aggregation of whales and krill has never been seen before in this area at this time of year," says Douglas P. Nowacek, Repass-Rodgers University Associate Professor of Conservation Technology at Duke. Most studies have focused on whale foraging habitats located in waters farther offshore in austral summer.

Nowacek and his colleagues observed 306 humpback whales â or about 5.1 whales per square kilometer, the highest density ever recorded â in Wilhelmina Bay. They measured the krill biomass at about 2 million tons. Small, floating fragments of brash ice covered less than 10 percent of the bay. The team returned in May 2010 and recorded similar numbers. Smaller but still higher-than-normal counts were also reported in neighboring Andvord Bay.

Advancing winter sea ice used to cover much of the peninsula's bays and fjords by May, protecting krill and forcing humpback whales to migrate elsewhere to find food, Nowacek says, but rapid climate change in the area over the last 50 years has significantly reduced the extent, and delayed the annual arrival, of the ice cover.

"The lack of sea ice is good news for the whales in the short term, providing them with all-you-can-eat feasts as the krill migrate vertically toward the bay's surface each night. But it is bad news in the long term for both species, and for everything else in the Southern Ocean that depends on krill," says Ari S. Friedlaender, co-principal investigator on the project and research scientist at Duke.

Antarctic krill are shrimplike creatures that feed primarily on phytoplankton and live in large swarms in the Southern Ocean. Penguins, seals, seabirds and many whale species rely on the protein-rich, pinky-sized crustaceans as a source of food. Commercial fisheries are allowed to harvest up to three-and-a-half tons of the krill a year as food for farm-raised salmon and for oil, rich in omega-3 acids, which is used in human dietary supplements.

Around the Western Antarctic Peninsula, krill migrate in austral autumn from open ocean waters to phytoplankton-rich bays and fjords, where juveniles feed and the population overwinters under the protective cover of ice. There is a strong correlation between the amount of sea ice and the amount of krill that survive the long, harsh Antarctic winter.

"If there are more areas with large aggregations of krill hanging out in waters where sea ice has diminished, you could see a big decrease in the standing krill stock, especially if we have a few years of back-to-back bad ice and the krill can't replenish themserlves," Friedlaender says. Scientists already have documented drops in krill abundance over the last 50 years related to reduced sea ice cover. Further drops could have far-reaching consequences. Seals and penguins have a relatively small foraging range, and some can't eat any prey other than krill or hunt without the presence of sea ice. Whales can migrate longer distances and might be able to find food elsewhere, but may be affected in other ways, as evidenced by snippets of unexpected sounds being transmitted by 11 whales the Duke team tagged in the study.

"We're starting to hear songs being produced by whales in the Antarctic â sexual advertisements typically heard only in humpback breeding grounds that are located thousands of miles away from these bays," Friedlaender says.

Humpback whales typically reproduce once every three years, "so if a female doesn't have to go to the breeding grounds every year â if she has access to food here and isn't being forced out by sea cover â why should she leave?" Nowacek says. The presence of more females, coupled with access to a nightly krill feast, entices more males to stick around too. "So this may affect the timing and location of humpback breeding and other important lifecycle events."

Consideration of these factors, and the effects of rapid climate change, on krill dynamics will be critical to managing sustainable krill harvests and the continued recovery of baleen whales in the Southern Ocean, he says.

Nowacek holds appointments at Duke's Nicholas School of the Environment and Pratt School of Engineering. He and Friedlaender's co-authors on the study were Patrick Halpin, David Johnston and Andrew Read of Duke; Elliott Hazen of the NOAA/University of Hawaii Joint Institute for Marine and Atmospheric Research; Boris Espinasse of the UniversitÃ© de la MÃ©diterranÃ©e; and Meng Zhou and Yiwu Zhu of the University of Massachusetts. The study was conducted aboard the research vessel Lawrence M. Gould, which is operated by the National Science Foundation Office of Polar Programs.