Advantages Of Living In The Dark: Scientists Document The Multiple Evolution Events Of 'Blind' Cavefish

Researchers: Mercury Converted To Its Most Toxic Form In Ocean Waters 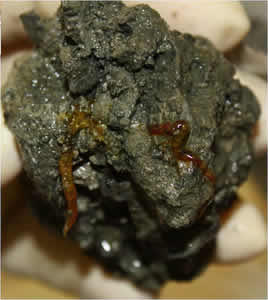 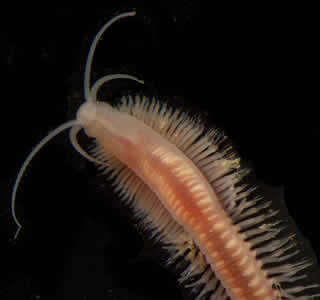 This family of worms, the Dorvilleids, is the first documented case of animals consuming Archaea. credit Andrew Thurber, OSU

CORVALIS, Oregon -- A team of scientists has documented for the first time that animals can and do consume Archaea â a type of single-celled microorganism thought to be among the most abundant life forms on Earth.

Archaea that consume the greenhouse gas methane were in turn eaten by worms living at deep-sea cold seeps off Costa Rica and the West Coast of the United States. Archaea perform many key ecosystem services including being involved with nitrogen cycling, and they are known to be the main mechanism by which marine methane is kept out of the atmosphere.

The finding of this new study adds a wrinkle to scientific understand of greenhouse gas cycles. Results of the study, which was funded by the National Science Foundation, have been published online in the International Society for Microbial Ecology Journal, a subsidiary of the journal Nature.

"This opens up a new avenue of research," said Andrew Thurber, a post-doctoral researcher at Oregon State University and lead author on the study. "Archaea weren't even discovered until 1977, and were thought to be rare and unimportant, but we are beginning to realize that they not only are abundant, but they have roles that have not fully been appreciated."

Archaea are considered one of the three "domains of life" on Earth, along with bacteria and eukaryota (plants and animals). Despite their abundance, no member of the Archaea domain has been known to be part of a food web.

One of the basic questions scientists have asked is whether this life form could act as a food source for animals. To answer this, the researchers performed a laboratory study during which they fed two types of Archaea to the worms, as well as meals of bacteria, spinach or rice, and the worms thrived on all of the food sources, growing at the same rate.

"That showed us that Archaea can be a viable food source for at least some animals," Thurber pointed out.

Thurber and his colleagues initially were looking at biological life forms at a cold seep in the deep ocean off Costa Rica, when they opened up a rock and found worms living within the crevices. They found that the worms had been feeding on Archaea, which had, in turn, been consuming methane. They were able to trace the isotopic signature of the methane from the Archaea to the worms.

From what they learned from the Costa Rican study, the scientists also discovered that worms of the same family as those found in the rocks consume methane-munching Archaea at cold seeps off northern California and at Hydrate Ridge off the central Oregon coast, west of Newport. The researchers think the family of worms, the Dorvilleids, uses its teeth to scrape the Archaea off rocks.

The consumption of Archaea by grazers, a process coined "archivory" by Thurber in the article, is particularly interesting because the only way it could be documented was by tracing the isotopic biomarkers from the methane. When the researchers attempted to trace consumption of Archaea through lipid types and other mechanisms, they failed because the chemicals and proteins broke down within the worms.

"It could be that many other animals are consuming Archaea but we haven't been able to detect it," pointed out Thurber, who did much of the research as a doctoral candidate at the Scripps Institution of Oceanography. "We still haven't found the right technique to identify animals that eat Archaea that don't rely on methane, but now we know to look.

"Hopefully, this will open up a lot of new research," Thurber added, "and provide a greater understanding of how the world works."

The deep ocean sequesters vast amounts of methane and researchers believe that Archaea consume a majority of it before it reaches the water column. The role of Archaea consumers now will have to be taken into effect, Thurber said.

"We're not yet sure of the implications," said Thurber, who is affiliated with OSU's College of Earth, Ocean, and Atmospheric Sciences. "But Archaea are found in many different places, from estuaries to the deep sea, so it is possible that they fit into food webs beyond the cold seeps where we documented the process."