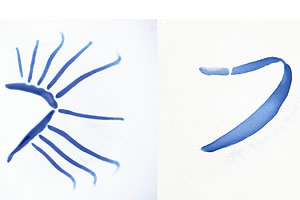 The shark arch gill skeleton (left) of sharks and cartilaginous fishes. The gills of other fishes (right). Image by J. Andrew Gillis

CHICAGO, Illinois -- The genetic toolkit that animals use to build fins and limbs is the same toolkit that controls the development of part of the gill skeleton in sharks, according to research published in Proceedings of the National Academy of Sciences by Chicago researcher Andrew Gillis and Professor Neil Shubin and Randall Dahn of Mount Desert Island Biological Laboratory.

“In fact, the skeleton of any appendage off the body of an animal is probably patterned by the developmental genetic program that we have traced back to formation of gills in sharks,” said Andrew Gillis, lead author of the paper and a graduate student in Organismal Biology & Anatomy. “We have pushed back the evolutionary origin of the developmental genetic program that patterns fins and limbs.”

This new finding is consistent with an old theory, often discounted in science textbooks, that fins and (later) limbs evolved from the gills of an extinct vertebrate, Gillis added. “A dearth of fossils prevents us from definitely concluding that fins evolved from gills. Nevertheless, this research shows that the genetic architecture of gills, fins and limbs is the same.”

The research builds on the breakthrough discovery of the fossil Tiktaalik, a “fish with legs,” which Shubin and his colleagues made in 2006. “This is another example of how evolution uses common developmental programs to pattern different anatomical structures,” said Shubin, who is the senior author on the PNAS paper and the Robert R. Bensley Professor and Associate Dean for Organismal Biology & Anatomy and Evolutionary Biology.

“In this case, shared developmental mechanisms pattern the skeletons of vertebrate gill arches and paired fins.”

The research also showed for the first time that the gill arch skeleton of embryonic skates (a living relative of sharks that has gill rays) responds to treatment with the vitamin A derivative retinoic acid in the same way a limb or fin skeleton does: by making a mirror image duplicate of the structure as the embryo develops.

“These findings suggest that when paired appendages appeared, the mechanism used to pattern the skeleton was co-opted from the gills,” Gillis said. “Perhaps we should think of shark gills as another type of vertebrate appendage—one that’s patterned in essentially the same way as fins and limbs.”

The deep structural, functional and regulatory similarities between paired appendages and developing gill rays, as well as the antiquity of gills relative to paired appendages, suggest that the signaling network that is induced by retinoic acid had a patterning function in gills before the origin of vertebrate appendages, the research concludes. And this function has been retained in the gill rays of living cartilaginous fishes.