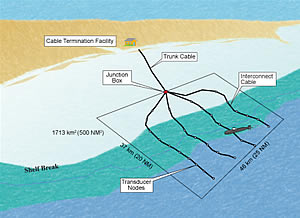 Schematic of the undersea warfare training range to be located off Jacksonville, Florida

WASHINGTON, D.C. -- The Department of the Navy announced today that it will locate an undersea warfare training range (USWTR) in the Jacksonville, Fla. operating area. BJ Penn, assistant secretary of the Navy for installations and environment, signed the record of decision (ROD), which follows consultation with federal regulators and the completion of an overseas environmental impact statement/environmental impact statement (OEIS/EIS) in June.

Installation consists of the range’s planning, design, and construction. When completed, the USWTR will cover an approximately 500-square-nautical mile area within the waterspace commonly referred as the Jacksonville OPAREA, where a variety of Navy training already occurs. The USWTR location is well outside the areas designated as critical habitat for the North Atlantic right whale.

The USWTR’s instrumentation will gather real-time data that will enable the Navy to analyze and improve their anti-submarine warfare training scenarios, tactics, and procedures. The range’s location will provide ships, submarines, and aircraft with a realistic and challenging littoral training environment that mirrors the areas in which the Navy finds itself increasingly operating.

“The Department of the Navy is committed to protecting the ocean while maintaining readiness in this critical mission area,” explained Donald Schregardus, deputy assistant secretary of the Navy for environment. “This decision satisfies both of these vitally important objectives.”

The department’s decision conforms to the process outlined in the National Environmental Protection Act and Executive Order 12114, which require analysis of the environmental consequences of federal actions such as the USWTR construction. Throughout the USWTR environmental impact analysis, Navy planners and scientists worked closely with federal regulators from the National Marine Fisheries Service.