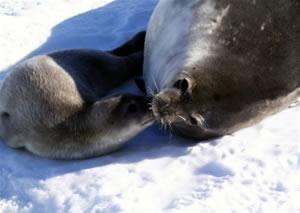 Research reveals that Weddell seals can hold their breath up to 90 minutes underwater without damage to their brain. Photo by Lee Fuiman/NOAA

SANTA CRUZ, California -- No human can survive longer than a few minutes underwater, and even a well-trained Olympic swimmer needs frequent gulps of air. Our brains need a constant supply of oxygen, particularly during exercise.

Contrast that with Weddell seals, animals that dive and hunt under the Antarctic sea ice. They hold their breath for as long as 90 minutes, and remain active and mentally alert the whole time. The seals aren't fazed at all by low levels of oxygen that would cause humans to black out. What's their secret?

Certain animals--including dolphins, whales and sea otters--appear to be protected by elevated levels of oxygen-carrying proteins in their brains, according to a study by researchers at the University of California, Santa Cruz, led by Terrie Williams, professor of ecology and evolutionary biology. The team measured and compared the amounts of these complex oxygen-carrying proteins--called globins--in the cerebral cortex of 16 different mammalian species. The results suggest that some species have evolved the capacity to protect their brains from conditions of low oxygen, also called hypoxia.

"What was remarkable was the level of variability we found," said Williams. "Some animals had three to 10 times more neuroprotecting type globins than others. These wild species may hold many clues about how to turn on protective mechanisms in the mammalian brain."

The discovery could have important implications for understanding stroke and aging in humans, according to Williams. It's not yet clear whether animals of a particular species are born with high amounts of brain globins, or whether their behavior and environment stimulate the production of globins. But in either case, the amounts appear to be malleable. That's promising, she said, because if globin production could be boosted in humans, then brain damage due to disease or aging could potentially be minimized.

"The mammalian brain appears to have a remarkable capacity for increasing neuroprotective globins--we're seeing that in a comparative way in animals," Williams explained. "Could we take advantage of that" Could we retrain the human brain to improve our own survival" We don't know yet, but it's certainly intriguing and worth investigating."

The study appears online December 18th in the Proceedings of The Royal Society B. Williams is lead author of the paper, entitled "Running, swimming and diving modifies neuroprotecting globins in the mammalian brain."

Scientists have long wondered why marine mammals are so tolerant of hypoxia. The conventional wisdom was that they had evolved physiological adaptations that increased the delivery of oxygen to the brain--for example, higher capillary density and blood flow that could be shunted preferentially to the brain. But despite such adaptations, blood oxygen levels still plummet after just a few minutes underwater, according to recent studies by Williams's group and others. How marine mammals could keep their vital organs alive on such low levels of oxygen remained a mystery.

Some unknown factor seemed to be involved, and Williams's attention recently turned to new types of globins that were discovered in 2000. Called neuroglobins and cytoglobins, these oxygen-carrying proteins reside in the brain tissue. That distinguishes them from hemoglobin, a similar iron-containing protein complex that carries oxygen in the blood and circulates throughout the body. Another molecular relative, myoglobin, facilitates oxygen delivery only in muscle tissue.

Scientists are still investigating the physical chemistry of these brain globins. So far, the evidence suggests that cytoglobins could play a role in efficiently moving oxygen out of the blood and into the brain, even when oxygen levels are extremely low, Williams said. The brain's neuroglobins, on the other hand, appear to be able to grab reactive oxygen and prevent the formation of destructive free radicals. Together, she said, these two resident neuroglobins could help keep the brain functioning and well-protected against damage during hypoxia.

To test this hypothesis, Williams brought together a team that included molecular biologists, biochemists, and wildlife veterinarians. The researchers wanted to find out if the amounts and kinds of globins in the brain correlated with the physical activity patterns of various wild mammals. They collected brain tissue from 41 terrestrial mammals and 23 marine mammals representing 15 wild species and one laboratory species. These came from state animal control programs or were "found" animals that had died from roadkill, fisheries bycatch, or stranding.

For each brain sample, the team measured hemoglobin and resident neuroglobins--the neuroglobins and cytoglobins--in the cerebral cortex. In the laboratory of coauthor David Kliger, a professor of chemistry and biochemistry at UCSC, the researchers used a technique called spectrophotometry to identify and quantify the minute quantities of brain globins that were present at the time of the animal's death.

They found a striking difference in globin levels depending on whether the species was a terrestrial, swimming, or diving specialist, according to Williams. Compared to terrestrial mammals, marine species had higher amounts of hemoglobin--and their brain tissues were darker in color due to an abundance of iron.

But the study results weren't entirely as expected: the shallow-swimming and highly active dolphins, sea lions, and sea otters had higher amounts of resident neuroglobins than did the deep-diving whales. And then there was the bobcat. Unlike the dog-related species--foxes and coyotes--three bobcat individuals had surprisingly high amounts of resident brain globins.

"Maybe it's not just breath-holding that stimulates these globins, but high levels of activity, such as sprinting," Williams said.

The research hasn't completely solved the mystery, but it's a first step, said Mary Zavanelli, a lecturer in molecular, cell, and developmental biology at UCSC. Zavanelli developed the laboratory techniques for measuring the amounts and kinds of globins in brain tissue by analyzing gene expression. In this way, she confirmed the species differences.

"There won't be a quick answer because this is complicated biology," said Zavanelli. "But the techniques are straightforward and simple, so it's just a matter of focusing on our questions. The big problem is getting enough brain tissue that's in good shape, especially from found wild animals."

As this research project continues, it might expand to include an investigation of whether high levels of brain globins are correlated with long lifespans in certain species. Bowhead whales have been known to live as long as 211 years, Williams noted. That makes her wonder how their brains are protected and whether whales ever suffer from strokes.

"These animals may have solved the aging brain problem," she noted. "Neuroglobins might give us some clues as to how."