For Deep-Sea Cephalopods, 'Switchable' Camouflage Saves The Day; 'Seeing Others Without Being Seen Yourself' 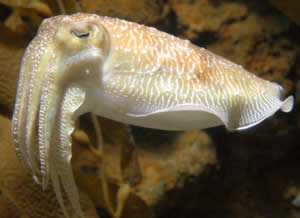 WOODS HOLE, Massachusetts -- Cuttlefish are well-known masters of disguise who use highly developed camouflage tactics to blend in almost instantaneously with their surroundings. These relatives of octopuses and squid are part of a class of animals called cephalopods and are found in marine habitats worldwide. Cephalopods use camouflage to change their appearance with a speed and diversity unparalleled in the animal kingdom, however there is no documentation to date that they use their diverse camouflage repertoire at night.

In a paper published in the April 2007 issue of The American Naturalist, MBL (Marine Biological Laboratory) Senior Scientist Roger Hanlon and his colleagues report, for the first time, that giant Australian cuttlefish employ night camouflage to adapt quickly to a variety of microhabitats on temperate rock reefs. The research sheds light on the animal's remarkable visual system and nighttime predator/prey interactions.

While it's known that some marine fish and invertebrates use night camouflage as an anti-predator tactic, most camouflage studies are based on observations taken during daytime or dusk because videotaping behavioral data at night can be technically difficult. According to Hanlon, many animals perform some type of nocturnal color change, but the biological explanations behind the phenomenon have received scant attention in the science world. "The scarcity of studies on visual predator/prey interactions at night constitutes a major gap in sensory and behavioral ecology," he says.

Using a Remotely Operated Vehicle (ROV) equipped with a video camera, Hanlon and his team observed the giant Australian cuttlefish, Sepia apama, on their southern Australian spawning grounds over the course of a week. They observed that only 3% of cuttlefish were camouflaged during the day, during peak spawning periods. However, at dusk, the animals settled to the bottom and 86% of them quickly adapted their body patterns to blend in with habitats from sea grass to rocky reefs.

"The fact that we observed multiple camouflage pattern types, each effective in different microhabitats, provides two important insights into visual predator/prey interactions at night," says Hanlon. "First, it provides the first behavioral evidence that cuttlefish have fine-tuned night vision. We know that in daytime they use visual information of their immediate surrounds to choose their camouflage pattern, and these new data demonstrate that they can fine-tune their camouflage patterns in concert with different visuals surrounds of each microhabitat at night. Curiously, the visual mechanism for night vision is largely unknown for cephalopods. Second, such fine-tuned camouflaged patterning implies strongly that fish predator vision at night is keen as well."

Visual predation at night is an unstudied phenomenon in the marine world, notes Hanlon. "From the perspective of a behavioral ecologist, we are ignorant of perhaps half of what goes on each daily cycle. There is a large ocean frontier out there yet to be studied."