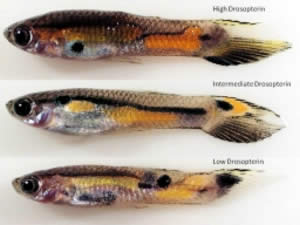 If you were a female guppy, who would you find most attractive?

LOS ANGELES, California -- Guppies in the wild have evolved over at least half-a-million years â long enough for the males' coloration to have changed dramatically. Yet a characteristic orange patch on male guppies has remained remarkably stable, though it could have become redder or more yellow. Why has it stayed the same hue of orange over such a long period of time?

"Sometimes populations have to evolve just to stay the same," said Greg Grether, a UCLA professor of ecology and evolutionary biology and co-author of a study published Nov. 23 in the online edition of the journal Proceedings of the Royal Society B: Biological Sciences, a major journal for research in evolutionary biology.

"In this case, the males have evolved back over and over again to the color that females prefer," said Grether, who noted that there are many examples in which there is less variation among populations of a species than life scientists would expect.

The new study, funded by the National Science Foundation, "provides a neat solution to a mystery that has puzzled me for years," he said.

The orange patches on male guppies are made up of two pigments: carotenoids (which they ingest in their diets and are yellow) and drosopterins (which are red and which their bodies produce). Carotenoids are the same pigments that provide color to vegetables and fruits. Plants produce carotenoids, but animals generally cannot; guppies obtain most of their carotenoids from algae.

UCLA's Kerry Deere, the lead author of the study, conducted experiments in which she presented female guppies (Poecilia reticulata) with a choice of males with low, medium and high levels of drosopterin to see which males they preferred. In her experiments, the females were given a wider range of pigment choices than they would find in the wild. Deere, who was a graduate student of ecology and evolutionary biology in Grether's laboratory at the time and is currently a UCLA postdoctoral scholar in human genetics, conducted more than 100 mate-choice trials.

The females strongly preferred the intermediate males, those whose patches, or spots, were the right hue of orange â not too red and not too yellow.

"The females preferred the males with an intermediate drosopterin level by a highly significant margin," Deere said.

"Males that are closer to this preferred hue probably have more offspring," Grether said.

If guppies were dependent only on carotenoids for their orange coloration, one would expect to find large changes in the color of their orange patches because the availability of algae varies by location. Guppies are native to Trinidad and Venezuela; the ones in this study were from Trinidad.

(Unlike the colorful guppies sold in pet stores, female guppies in the wild do not have bright coloration like the orange patches. Males are not as ornate, or as large, as the pet-store variety either.)

"A pattern I discovered 10 years ago, which was mysterious at first, is that in locations where more carotenoids are available in their diet, guppies produce more of the drosopterins," Grether said. "There is a very strong pattern of the ratio of these two kinds of pigments staying about the same.

"To human eyes at least, as the proportion of carotenoids in the spots goes up, the spots look yellower, and as the proportion of drosopterins goes up, the spots look redder. By maintaining a very similar ratio of the two pigments across sites, the fish maintain a similar hue of orange from site to site. What is maintaining the similar pigment ratio across sites and across populations? The reason for the lack of variation is that genetic changes counteract environmental changes. The males have evolved differences in drosopterin production that keep the hue relatively constant across environments. As a result of Kerry's experiment, we now have good evidence that female mate choice is responsible for this pattern."

While there are many cases in nature in which genetic variation in a trait masks environmental variation, there are very few examples where the cause is known.

"I originally assumed if there was variation among populations in drosopterin production, it would be the populations where carotenoid availability was lowest that were producing more of these synthetic pigments to compensate for the lack of carotenoids in their diet. But we found the opposite pattern," Grether said. "They're not using drosopterins as a carotenoid substitute; they're matching carotenoid levels with drosopterins. Why they are doing that was a mystery. The answer appears to be that it enables them to maintain the hue that female guppies prefer."