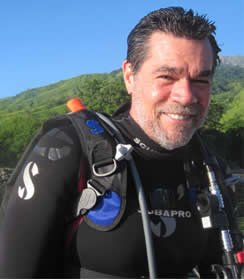 MIAMI, Florida -- Peter Hughes recently announced his resignation as President of Peter Hughes Diving, Inc. and the Dancer Fleet. Having built the live-aboard dive boat company from scratch over the past 25 years, Hughes reluctantly knew he had to sell the company in 2008 as a result of mounting debts due to the rapidly collapsing global economy.

Hughes stated: "I'll be forever grateful to Wayne B. Brown for coming along when he did to purchase the company, as he undoubtedly saved the company from what most certainly would have been serious difficulties."

Brown retained Hughes as President of the company after the purchase, on an open-ended arrangement. The two have worked together over the past two years and they now see the company in an improved, more secure position.

Hughes further stated: ""I felt the time was right for me to resign and move on. I found few new challenges I need as an individual, working for the company I had built over a quarter century. My position was as much "emeritus" as it was hands on. I now cherish the new challenges I face by reverting back to square one, and once again, starting from scratch." And then added with a knowing smile, "of which I am sure there will be many."

Hughes first order of business was to purchase the startup company DivEncounters, Inc. of which he will serve as President. His immediate responsibility will be to handle the affairs of the M/V Galapagos Sky (formerly Sky Dancer), ensuring the continued high standard of operation. Hughes hopes to raise the bar on operations and service and consider possible product expansion in the future. Hughes has also re-established his long-standing relationship w/ Scubapro, the dive manufacturing company "of first choice," according to Hughes.