Jaws Under Ice: Mysterious Arctic Shark Found in Quebec; 'Their Eyes Swivel and Follow You' 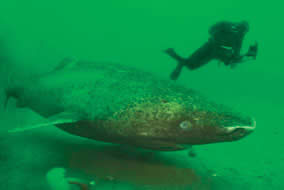 In the frigid, murky waters of the St. Lawrence River in Québec, UBC marine biologist and veterinarian Chris Harvey-Clark is painting a clearer picture of a mysterious predator that could be the longest-lived vertebrate on the planet.

The Greenland shark typically inhabits the deep, dark waters between Greenland and the polar ice cap. At over six metres long and weighing up to 2,000 kilograms, it is the largest shark in the North Atlantic and the only shark in the world that lives under Arctic ice. Once heavily harvested for its vitamin A-rich oil -- as many as 50,000 were caught annually according to a 1948 estimate -- little is known about the animal.

“All the papers published on the species, including magazine articles, can barely fill two shoeboxes,” says Harvey-Clark, who became fascinated by sharks at age 12 after seeing a photograph in the Ottawa Citizen that depicted an ice fisherman and what he now knows was a Greenland shark.

“All the questions a Grade two class would ask -- where do they go, what do they eat, how do they breed, how big do they get or even how long they live -- we can’t say for sure.”

Various historic accounts and anecdotes portray the Greenland shark as a scavenger that dwells in extremely deep water -- one was spotted at a depth of more than 2,100 metres. They favour seal carcasses but will eat almost anything -- one was found with an entire caribou in its stomach. The only age analysis to date, by Norwegian researchers, pegs them growing about half a centimetre a year, which would put a seven metre adult at several hundred years old, easily beating the giant tortoise by decades, even centuries.

In 2003, after tracking the enigmatic animal for five years, Harvey-Clark and fellow diving enthusiast Jeffrey Gallant followed leads to Baie-Comeau, a small town about 400 kilometres northeast of Québec City. There, the pair documented -- for the first time under natural conditions -- Greenland sharks reveling in shallow water.

Since then, Harvey-Clark and Gallant, a regional director of the Shark Research Institute, based in Drummondville, QC, have organized a group of local volunteer divers who help them survey the region every summer. The team has uncovered new information about Greenland sharks, raising even more questions.

“They seem to hang around for the summer months, then disappear completely,” says Harvey-Clark, who treats every encounter with the sharks -- the team has seen 85 in total, and as many as 11 in one dive -- as possibly the last.

“We really have no idea why they come to waters as shallow as 10 metres deep, why they return every summer so far, or what brought them here three years ago in the first place,” says Harvey-Clark.

“Prey abundance is poor here and certainly not enough to justify so many large predators in one small area. We think it may have something to do with ecological shifts taking place in the St. Lawrence right now, or it could just be a sunken whale carcass nearby on the ocean floor that is attracting them.”

Finding these rare, deep sea animals in shallow water is unique. The Gulf of St. Lawrence, with water temperature hovering around two degrees Celsius, had been a scuba diving training ground for decades without notable Greenland shark sightings.

“Now it’s the only place on the planet where people can see this species on any kind of predictable basis, behaving in a natural fashion,” says Harvey-Clark.

By tagging the sharks and tracking them in real time, the team has learned that some females remain in the area, in extreme depths, while males travel up-river towards Québec City, where marine mammals are abundant.

“We’ve seen one female at the same location, around the same date, three years in a row. It’s exciting because this kind of behaviour, termed philopatry, has been documented in migratory birds, but rarely in sharks,” says Harvey-Clark.

“We’ve also found that the sharks are active in what we call a diel pattern. Essentially they stay in deep water during the day but from dusk till dawn, they rise up from 60 metres and begin a cycle of swimming vertically to the surface every 20 minutes, all night long,” says Harvey-Clark. “We think they may be either hunting seals, or it’s social.”

Another major finding is that almost none of the sharks observed in this area have parasites on their eyes, a disease that affects 98.9 per cent of Arctic sharks and severely affects their vision, virtually blinding them.

“The sharks in the St. Lawrence have beautiful, crystal clear eyes and are quite visual. As you swim by, their eyes swivel and follow you, which sets them apart from the population in the Arctic,” says Harvey-Clark.

“They probably don’t see very well but using a variety of other sensory modalities, they are very effective, stealthy predators and could take out an agile seal in zero visibility without alerting it.”

With a number of journal papers published and more in the works, Harvey-Clark has organized an interdisciplinary team for next summer’s expedition -- funding it with equipment donations and out of his own pocket. He has designed field experiments to find out how the sharks use various sensory modalities to find their next major meal, which could be months or even years apart.

“My take on the Greenland sharks is that they’re probably like hyenas, capable of both predating and scavenging. They have lower teeth like an old-fashioned straight razor that take a five kilogram chunk out of a whale like an ice cream scoop. But they can also suck up a large flounder like a vacuum cleaner. It gives you pause when you are diving with them.”