Researchers Reveal That Sharks Are Hygienic; 'An Important Life Function Which Is Easily Disturbed By Man'

Researchers: Tags Reveal White Sharks Have Neighborhoods In The North Pacific; 'They're Not Swimming Around Aimlessly' 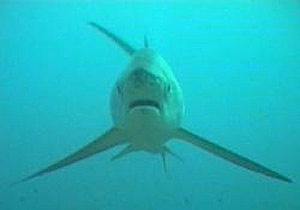 BANGOR, Wales -- Scientists at Bangor University have shown for the first time, that sharks visit shallow tropical reefs or 'seamounts', to benefit from cleaning services and rid themselves of cumbersome parasites. The strategy is risky however, since by being there, they become vulnerable to interference from human activity.

The paper published in PLoS ONE, (14 March 2011) describes the first observations of thresher sharks venturing into shallow coastal waters to interact with cleaner wrasse, a type of small fish that groom other fish species. Thresher sharks live in the open oceans and much of the knowledge of them to date is based on fisheries bycatch.

This study, funded by a NERC PhD studentship to Simon Oliver in the School of Ocean Sciences, examined the behavior of these elusive sharks as they invite cleaners to remove parasites and dead tissue. The sharks and cleaning stations are vulnerable to dynamite fishing on the shallow reefs, and the cooperative interaction between the species is disturbed by human activities. The results provide an insight into the behavioral ecology, biology, and conservation of a shark species, which urgently requires protection.

The researchers demonstrated that sharks regularly visit 'stations' where they adapt their behavior to facilitate cleaning services by 'posing' and making themselves more attractive for cleaner fishes. Cleaners then choose to feed on specific parasites from specific areas of the shark's body.

Dr John Turner, Senior Lecturer in Marine Biology at the School of Ocean Sciences and Simon's supervisor, said "The work uniquely describes why some oceanic sharks come into coastal waters to perform an important life function which is easily disturbed by man. Such knowledge will inform offshore industry, science, and conservation policy."

Simon Oliver undertook the fieldwork in Cebu in the Philippines, and has founded the Thresher Shark Research and Conservation Project to promote and disseminate shark research, education and conservation to a broad local, regional and international public and scientific outreach. He said "While fish and predator communities at seamounts are well documented in the literature, why sharks were attracted to seamounts remained largely unknown. This new understanding provides an informed basis for conservation management to protect these sites, which form part of their habitat."

The study highlights key ecological links between the effects of parasite infection on sharks and the necessity for their control through services provided by 'cleaners' who remove them.

Nigel Hussey, who completed his PhD at Bangor University, said that "The study used a remote video system, which enabled us to identify behavior for the first time, which we've classified as 'circular stance swimming'. This method was particularly suited for the study of such an elusive and little known shark species."

Alison Beckett, who completed her postgraduate degree at Bangor University said "The study presents a unique investigation into shark behavior, specifically the cooperative relationship between thresher sharks and two species of cleaner fish. It is also an exciting multi-disciplined biological exposÃ© of the pelagic thresher shark, designated as Vulnerable by the IUCN's Red List."