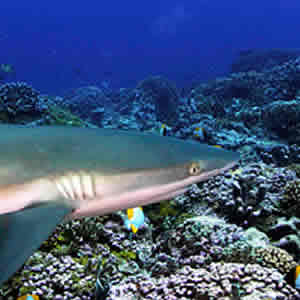 A UBC study shows shark tourism currently generates over US$314M annually and is expected to double in the next 20 years. credit: Shawn Heinrichs

Sharks are worth more in the ocean than in a bowl of soup, according to researchers from the University of British Columbia.

A new study, published today in Oryx – The International Journal of Conservation, shows that shark ecotourism currently generates more than US$314 million annually worldwide and is expected to more than double to US$780 million in the next 20 years.

In comparison, the landed value of global shark fisheries is currently US$630 million and has been in decline for the past decade. An estimated 38 million sharks were killed in 2009 to feed the global fin trade alone.

"The emerging shark tourism industry attracts nearly 600,000 shark watchers annually, directly supporting 10,000 jobs," says Andres Cisneros-Montemayor, a PhD candidate with UBC's Fisheries Economics Research Unit and lead author of the study. "It is abundantly clear that leaving sharks in the ocean is worth much more than putting them on the menu."

"Sharks are slow to mature and produce few offspring," says Rashid Sumaila, senior author and director of UBC's Fisheries Centre. "The protection of live sharks, especially through dedicated protected areas, can benefit a much wider economic spectrum while helping the species recover."

The research team from UBC, the University of Hawaii and Universidad Autónoma de Baja California Sur in Mexico examined shark fisheries and shark ecotourism data from 70 sites in 45 countries. Almost $124 million in tourism dollars were generated annually in the Caribbean from shark tourism, supporting more than 5,000 jobs. In Australia and New Zealand, 29,000 shark watchers help generate almost $40 million in tourism expenditure a year.