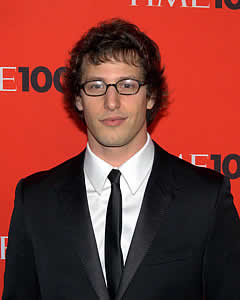 After a long and arduous process of blood typing, insurance verification and wetsuit fittings, Discovery Channel today announced the appointment of its first ever Chief Shark Officer (CSO), Andy Samberg.

As CSO, Samberg will host the network's 24th annual SHARK WEEK celebration, cable's longest running programming event and the official mark of summer. He will film on-air wraps for the weeklong event, host a SHARK WEEK special and may even take the plunge and dive with the apex predators.

"SHARK WEEK is a summertime celebration. It's about being scared out of your swim trunks but it's also about being entertained and learning something new. Andy Samberg, an incredibly talented comedian and innovator, is the perfect person to bring those elements together and represent Discovery for our biggest week of the year," said Discovery Channel President and General Manager Clark Bunting.

SHARK WEEK is bigger than ever - it was watched by almost 31 million people last year, Discovery's highest rated to date. The event has become a pop culture phenomenon. In the immortal words of 30 Rock's Tracy Morgan: "Live every week like it's Shark Week."

About Andy Samberg With a diverse range of comedic talents, Andy Samberg has emerged as a captivating and hilarious leading man on screens both big and small. As an Emmy® award winning writer, Samberg is achieving as much success behind the scenes as he is on screen. Samberg, along with his LONELY ISLAND partners Akiva Schaffer and Jorma Taccone, will release their highly anticipated sophomore album Turtleneck and Chain on May 10th.

Samberg will soon start production on Sean Anders' I Hate You, Dad, co-starring Adam Sandler and James Caan as well as Celeste and Jesse, written by and co-starring Rashida Jones. Samberg can also be seen this summer in Will Gluck's Friends with Benefits opposite Justin Timberlake and Mila Kunis and Mark Mylod's What's Your Number? opposite Anna Faris this summer. Samberg is currently in his sixth season as a cast member on Saturday Night Live.