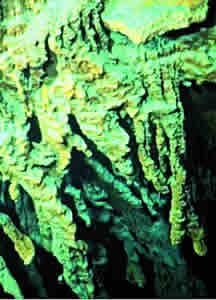 This is a view of rusticles on the wreck of RMS Titanic. Credit: RMS Titanic Inc.

HALIFAX, Nova Scotia -- A brand-new bacterial species has been found aboard the RMS Titanic, which is contributing to its deterioration. The discovery reveals a potential new microbial threat to the exterior of ships and underwater metal structures such as oil rigs.

The researchers, who report their findings in the latest issue of the International Journal of Systematic and Evolutionary Microbiology published on 8 December, isolated the micro-organisms from a 'rusticle', collected from the RMS Titanic, 3.8 km below the ocean surface.

The novel bacterium has been named Halomonas titanicae by the scientists from Dalhousie University, Halifax, Canada and the University of Sevilla, Sevilla, Spain. The team also tested the rusting ability of the bacterium - and found that it was able to adhere to steel surfaces, creating knob-like mounds of corrosion products, which they will be reporting in an upcoming paper.

A similar bacterial corrosive process is thought to be responsible for the formation of the rusticles â which resemble rusty icicles â that adorn the hull of the RMS Titanic. While these appear to be solid structures, rusticles are highly porous and support a complex variety of bacteria, suggesting that H. titanicae may work in conjunction with other organisms to speed up the corrosion of the metal.

The RMS Titanic was made up of 50,000 tons of iron and has been progressively deteriorating for the past 98 years. Lead researchers Dr Bhavleen Kaur and Dr Henrietta Mann, from Dalhousie University explained that the role of microbes in this process is now starting to be understood. "We believe H. titanicae plays a part in the recycling of iron structures at certain depths. This could be useful in the disposal of old naval and merchant ships and oil rigs that have been cleaned of toxins and oil-based products and then sunk in the deep ocean."

Dr Kaur and Dr Mann believe that the findings have opened up further areas of research that could have applications for industry. "We don't know yet whether this species arrived aboard the RMS Titanic before or after it sank. We also don't know if these bacteria cause similar damage to offshore oil and gas pipelines," they said. "Finding answers to these questions will not only better our understanding of our oceans, but may also equip us to devise coatings that can prevent similar deterioration to other metal structures."