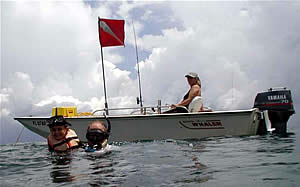 Dive flags must be displayed at all times while divers and snorkelers are in the water. (FWC photo)

TALLAHASSEE, Florida -- In the past five years, 22 divers in Florida’s waters have been killed or injured after a boat struck them. Many of these incidents could have been avoided had the boaters been on the lookout for divers-down flags, or if the divers had properly displayed the dive flags to alert boaters to their presence.

“Tens of thousands of residents and visitors enjoy the great snorkeling and diving opportunities Florida has to offer,” Bingham said. “Obviously, divers don’t want to be struck by a boat, and boaters don’t want to strike anyone either.”

Bingham conducts an annual “Wave the Flag” enforcement detail targeting dive-flag-related violations in south Florida. He is on a mission to promote dive-flag awareness and is encouraged by the proclamation.

“We want folks to enjoy diving without having to look over their shoulder wondering if they are going to be hit,” Bingham said. “It’s time folks pay attention to what a divers-down flag means and to ‘steer clear,’ and divers need to make sure they present their flags according to the laws.”

Divers and snorkelers must make every reasonable effort to stay close to their flag. When they exit the water, the divers-down flag must be taken down.

“It is imperative that divers and snorkelers remove the divers-down flag once they are out of the water or, otherwise, the presence of the flag becomes meaningless to boaters,” Bingham said. “The display of the flag should never be used for any other reason than what it is intended – to indicate there are persons in the water. Using it for any other reason is dangerous and unlawful.”

“With bay scallop and spiny lobster season just around the corner, the FWC, our marine law enforcement partners, the governor and the cabinet members really want to emphasize the importance of engaging all safety precautions, including the use of divers-down flags,” Bingham said. “If you’re diving, display a flag. If you’re boating, look for the flag.”