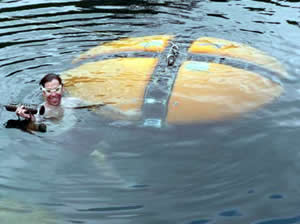 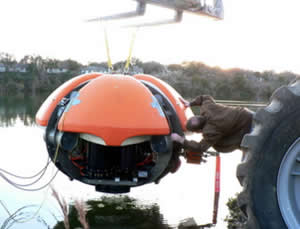 The DEPTHX explorer shown during testing

PITTSBURGH, Pennsylvania -- An underwater robot, shaped like a flattened orange, maneuvered untethered and autonomously within a 115-meter-deep sinkhole during tests this month in Mexico, a prelude to its mission to probe the mysterious nether reaches of the world's deepest sinkhole.

"The fact that it ran untethered in a complicated, unexplored three-dimensional space is very impressive," said Stone, an engineer and expert cave diver who heads Stone Aerospace Inc. of Austin, Texas. That's a fundamentally new capability never before demonstrated in autonomous underwater vehicles (AUVs), he added.

The autonomous navigation and mapping software that enabled DEPTHX to safely and precisely operate in the close confines of cenote La Pilita was developed by a team of Carnegie Mellon researchers led by David Wettergreen, associate research professor in the Robotics Institute. "These experiments give us confidence that DEPTHX will be able to meet the challenge of its ultimate goal, the cenote El ZacatÃ³n," Wettergreen said.

Like La Pilita, ZacatÃ³n is in the Mexican state of Tamaulipas and was formed by the collapse of a limestone chamber dissolved by warm, acidic groundwater that originated in a nearby volcanic region. The current theory is that the cenote formed under a vast travertine bed like that of Mammoth Hot Springs in Yellowstone National Park. But no one knows how deep ZacatÃ³n goes. Human divers, descending far below safe depths, have made it to 282 meters without reaching bottom. Sonar doesn't work over long distances in the confines of the cenote, and current measurements peter out at around 270 meters.

NASA has funded the mission to develop and test technologies that might someday be used to explore the oceans hidden under the icy crust of Europa, one of Jupiter's moons. Team members, including scientists from the Southwest Research Institute, the University of Texas and the Colorado School of Mines, also want to learn more about the cenote, including its physical dimensions, the geothermal vents that feed it and whatever life exists at various depths.

Because a tether could become tangled or snagged at great depths, DEPTHX is designed to operate autonomously — independent of human control once it is under way. In areas that are well-mapped, the AUV can operate by dead reckoning, using depth, velocity and inertial guidance sensors to estimate its position. It is also equipped with an array of 56 sonar sensors — 32 with a range of 100 meters and 24 with a range of 200 meters — that send sonar beams out in all directions. DEPTHX uses the sonar data to detect obstacles and locate itself on a map, providing precise navigation in the pitch-black deep water.

In unexplored areas, the sonar is combined with a software technology known as simultaneous localization and mapping (SLAM) to produce maps of the cenote. In previous applications, Carnegie Mellon roboticists have used a two-dimensional version of SLAM to map environments such as building hallways and mine corridors. Because DEPTHX won't just maneuver side to side, but also up and down, one of Wettergreen's Ph.D. students, Nathaniel Fairfield, has adapted SLAM for more complicated 3-D operation.

The DEPTHX researchers, including Project Scientist George Kantor and Senior Research Programmer Dominic Jonak of Carnegie Mellon, traveled five hours south of the border town of Brownsville, Texas, to reach La Pilita. From the surface, the cenote looks like an ordinary duck pond, perhaps 30 meters across. "You can swim across it in a minute and it is warm, too," Wettergreen said. "But the top is like the neck of a vase. As you get deeper, the cenote widens until it's more than 100 meters across. It is a duck pond that is 115 meters [375 feet] deep."

The overhang created by the narrowing at the top of La Pilita made the cenote a challenging environment. Researchers made certain that, in event of emergency, DEPTHX could find its way to the surface, even if it had been operating underneath the overhang. Kantor has developed vehicle models and sensor filters for highly accurate dead reckoning. Repeated tests showed that DEPTHX could estimate its position even after hours of underwater operation, determining its location within one meter using dead reckoning and within 15 centimeters using sonar localization.

Wettergreen said the use of SLAM was limited during this initial test, but Stone noted that the 3-D mapping capability was demonstrated Feb. 5 when DEPTHX made a descent to the cenote floor. DEPTHX spun slowly as it descended, helping the sonar beams cover as much of the walls as possible. The resulting map revealed a tunnel on the western wall and a bulging of the northwest wall at a depth of about 30 meters.

DEPTHX was able to maneuver close to the walls so it could extend a mechanical arm with a coring mechanism and obtain wall samples. The AUV also conducted water-sampling experiments, though the full science instrumentation package won't be tested until the second week of March, when the researchers will return to La Pilita for a science investigation and complete rehearsal of their mission to ZacatÃ³n. The researchers plan to begin their exploration of ZacatÃ³n in May.