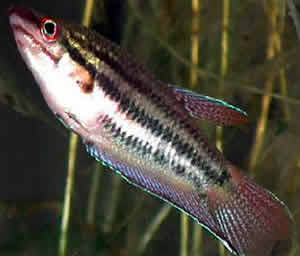 Female Croaking gouramis whisper to initiate sex according to research

VIENNA, Austria -- Female Croaking gouramis whisper to initiate sex according to research published in the current edition of the journal Animal Behaviour that describes the use of sound by this freshwater aquarium fish species during aggressive displays and courtship.

The Croaking gourami (Trichopsis vittata) has the ability to generate sound -- "croaks" -- by beating their pectoral fins. Aquarium owners know that this behavior is mostly exhibited at times of excitement but Dr. Friedrich Ladich, a biologist at the University of Vienna and author of the paper, took a closer look at "croaking" in the species. He found that "croaking" differs significantly depending on the situation.

"Agonistic disputes over territories result in lateral displays during which both sexes produce croaking sounds," he wrote. "During mating, a female approaches a male’s nest at the water surface and emits purring sounds in a vertical, head-up position."

Ladich said that it appears females spur courtship through their low-intensity purring sounds, making it the "only fish species in which females are known to initiate spawning acoustically."