Coral Death Strikes At Se Asia; 'The Worst Coral Die-Off We Have Seen Since 1998' 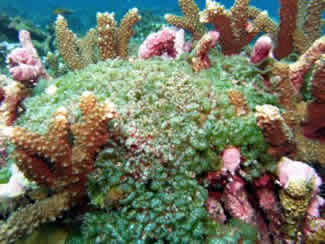 SANTA BARBARA, California -- Bacteria and algae are combining to kill coral –– and human activities are compounding the problem.

Scientists have discovered an indirect microbial mechanism whereby bacteria kill coral with the help of algae. Human activities are contributing to the growth of algae on coral reefs, setting the stage for the long-term continued decline of coral.

Reporting in the June 5 on-line version of the scientific journal Ecology Letters, scientists described laboratory experiments on coral and algae.

First author Jennifer Smith, a postdoctoral fellow at the National Center for Ecological Analysis and Synthesis (NCEAS) at the University of California, Santa Barbara, explained that the team of scientists, as part of a research expedition to the Line Islands, put algae and coral in chambers of seawater with filters between them. All of the corals with neighboring algae died, while coral without neighboring algae did not die. However, with the addition of an antibiotic, coral death even in the presence of algae was prevented, showing that bacteria fed by the algae are the agents of coral death. "We are the first to link these processes together," said Smith.

"Our study shows that bacteria are the front line that kill corals," Smith explained. "Algae release sugar, fueling bacterial growth on the corals. These bacteria suffocate the coral by cutting off the supply of oxygen. Once the corals die, this frees more space for more algae to grow. We think this process sets up a positive feedback loop that accelerates the rate of decline in already damaged reef ecosystems."

The report describes the other conditions that put coral reefs at risk. Overfishing reduces the number of fish that graze on algae, thus increasing the amount of algae on the reef. Nutrients from sewage and agricultural run-off fertilize the algae. Warmer water and more intense hurricanes resulting from global climate change are also blamed for coral death.

"Anyone who has been to the tropics and has had the experience of diving on a coral reef will not deny the spectacular beauty of these systems," said Smith. "They support numerous species of animals and plants and many species that remain undiscovered to science. These ecosystems are particularly important to humans because they support abundant fisheries –– commercial, subsistence, and recreational –– and they generate a large tourism industry."

She added that the reefs themselves protect coastal areas from erosion. From a biological perspective, coral reefs are more productive and support more species than any other marine ecosystem on the planet. While more reefs die every year due to an onslaught of human impacts, many scientists are hopeful that it is not too late to stop the destruction. She mentioned that there is a lot of excitement within the scientific community to begin working towards reef restoration and recovery in areas that have been heavily degraded.

Co-author Enric Sala said, "On certain coral heads I witnessed about half of the coral alive and half dead and covered by fleshy algae. In between the living half and the algae there was a 'band of sickness and death.' I thought, as many others did, that the corals were dying because of a disease, something unknown. But what we found is that the algae are enhancing the coral disease."

Sala is leader of the Line Islands Expedition (http://sio.ucsd.edu/lineislands) and is an associate professor at UC San Diego's Scripps Institution of Oceanography. He is also deputy director of the Center for Marine Biodiversity and Conservation there. Sala explained that for hundreds of thousands of years there have been natural disturbances, such as hurricanes, and coral reefs have always recovered. But now, because of threats such as global warming and pollution, the reefs are losing their ability to recover because humans are adding so many more disturbances to the ocean ecosystem. "In the same way that we take care of our bodies and treat illnesses, we cannot pretend to have healthy coral reefs by addressing individual threats," he said. "The human shadow is longer than we thought and there are invisible, lethal threats that we induce."

Co-author Stuart Sandin, a postdoctoral researcher in Sala's group, said, "This research highlights a little-appreciated, yet critically important interaction between algae and corals, key players on the coral reef. As algae become more abundant on reefs, through the effects of overfishing and pollution, there are indirect effects that accelerate further loss of corals. On the flip side, however, if algae are controlled by abundant fish populations, then the reef gains a capacity for recovery from other forms of disturbance, like hurricanes and sea warming."