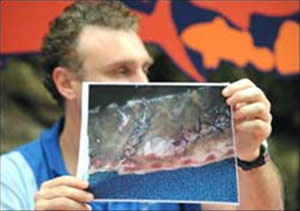 Hong Kong -- Chinese officials gave Hong Kong a ticking off Tuesday after one of five "Olympic" fish presented to the city by China ended up dead within days.

Vets believe the 1.1-metre sturgeon, the smallest of five presented by China, was fatally injured when a barracuda sharing the its giant tank bit it on Saturday.

However, the official said the sturgeon would nevertheless be replaced as the five fish given to Hong Kong represented the five rings of the Olympic symbol.

He added that he hoped Ocean Park officials could "better communicate" with Chinese experts to prevent any further accidents involving the sturgeons, RTHK reported.

Embarrassed Ocean Park officials have removed the remaining sturgeon from the Atoll Reef attraction where the three-year-old sturgeon met its sticky end.

They said the two species should have been able to co-exist without any problems and called the death of the sturgeon a "natural phenomenon."