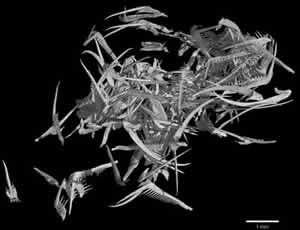 This is a 3-D reconstruction of the radula (a tongue-like structure used by molluscs for feeding) of the Baculites fossils. Credit: I. Kruta/MNHN 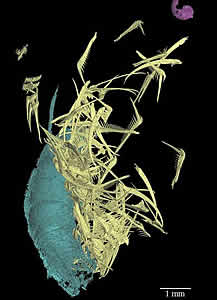 Teeth are in yellow and the fragments of the fossil's last meal, caught between the jaws, in blue (crustacean) and pink (snail), Credit: I. Kruta/MNHN

Scientists have discovered direct evidence of the diet of one of the most important group of ammonites, distant relatives of squids, octopuses and cuttlefishes. The discovery may bring a new insight on why they became extinct 65.5 million years ago, at the end of the Cretaceous.

Ammonites are among the world's most well known fossils but until now, there has been no experimental evidence of their place in the food chain. Using synchrotron X-rays, a Franco-American team of scientists led by Isabelle Kruta has discovered exceptionally preserved mouth organs of ammonites, along with the remains of a meal that show that these ammonites dined on plankton. Plankton was largely destroyed in the wake of the same asteroid impact that led to the demise of the dinosaurs and other species. After losing their source of food, ammonites and many other marine groups could not survive this cataclysmic event. The findings are published this week in Science.

Ammonites are extinct relatives of the squid and octopus. The Nautilus, a present-day marine invertebrate, is similar in appearance to many ammonites but is a more distant relative. Ammonites appeared about 400 million years ago (the Early Devonian) and experienced a population explosion in the early Jurassic. In fact, ammonites became such an abundant and diverse part of the marine fauna that they are used by paleontologists as classic "index" fossils to determine the relative ages of marine Mesozoic rocks in which they are found.

The team of researchers, led by Isabelle Kruta (MNHN, CNRS, UPMC), used the ESRF to perform X-ray scans of exceptional quality of Baculites fossils found on AMNH expeditions to the Great Plains in the United States. Results suggests that the large group of ammonites to which Baculites belongs, had jaws and radula (a kind of tongue covered with teeth) adapted for eating small prey floating in the water.

The study used synchrotron X-ray microtomography to check the presence, and then digitally reconstruct the mouths of three fossils found in South Dakota. The three-dimensional reconstructions are of such high quality that the jaws and teeth are revealed in their complete form. In addition, one specimen has a tiny snail and three tiny crustaceans in its mouth, one of them having been cut into two parts. Because these planktonic fossils are not found anywhere else on the specimen, the team thinks that the specimen died while eating its last meal rather than being scavenged by these organisms after death.

"I was astonished when I saw the teeth for the first time, and when I found the tiny plankton in the mouth," Isabelle Kruta (MNHN). "For the first time we were able to observe the delicacy of these exceptionally well preserved structures and use high quality details to obtain information on the ecology of these enigmatic animals."

"When you take into consideration the large lower jaws of ammonites in combination with this new information about their teeth, you realize that these animals must have been feeding in a different way from modern carrion-eating Nautilus," says Neil Landman (AMNH). "Ammonites have a surprisingly large lower jaw with slender teeth, but the effect is opposite to that of the wolf threatening to eat Little Red Riding Hood. Here, the bigger mouth facilitates feeding on smaller prey."

"X-ray synchrotron microtomography is currently the most sensitive technique for non-destructive investigations of internal structures of fossils. It started ten years ago with primate teeth, but is now widely applied in paleontology," says Paul Tafforeau (ESRF). " We made a first test on one of the Ammonite specimens after a test with a conventional scanner failed, and the results were so impressive that we scanned all the other available samples, discovering nearly each time a radula and for one of them, many other structures."

Ammonite jaws lie just inside the body chamber. The research team's new scans of Baculites, a straight ammonite found world-wide, confirms older research that ammonites had multiple cusps on their radula teeth. The radula can now be seen in exquisite detail: the tallest cusp is 2 mm high, tooth shape varies from saber to comb-like, and teeth are very slender. The jaw is typical of this group of ammonites (the aptychophorans) in that the lower jaw is larger than the upper jaw and consists of two halves separated along a midline.

Until recently, the role of ammonites in the marine food web was unknown, although some clues were provided by Landman and colleagues on the shape of the jaw, as well as a 1992 paper by Russian scientists that reconstructed some of the internal structures by slicing fossils..

"The plankton in the Baculites jaws is the first direct evidence of how these uncoiled ammonites fed. This helps in understanding their evolutionary success in the Cretaceous." says Fabrizio Cecca (UPMC).

"Our research suggests several things. First, the radiation of aptychophoran ammonites might be associated with the radiation of plankton during the Early Jurassic," say Landman. "In addition, plankton were severely hit at the Cretaceous-Tertiary boundary, and the loss of their food source probably contributed to the extinction of ammonites. This research has implications for understanding carbon cycling during this time".

Isabelle Rouget (UPMC) agrees, adding that "we now realize that ammonites occupied a different niche in the food chain than we previously thought."