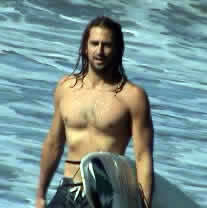 Map of 'the shark bite capital of the world' 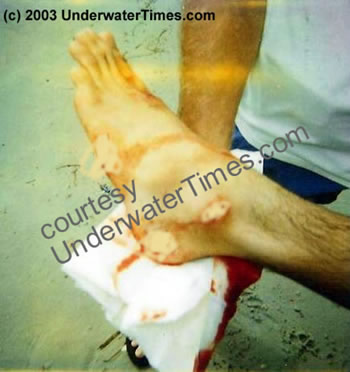 On the beach, Jimmy's foot after the shark attack 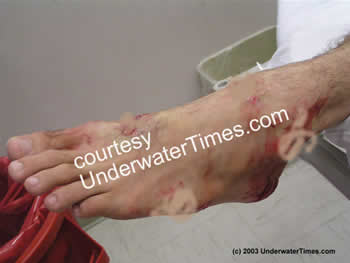 Photo of Jimmy's foot after the shark attack 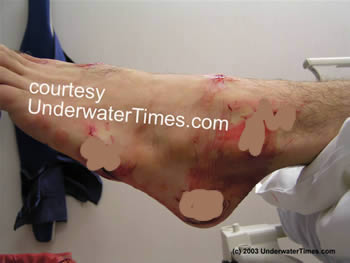 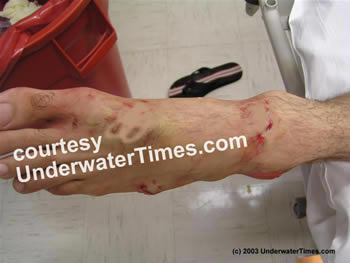 NEW SMYRNA, Florida -- If someone didn’t tell you, you would never know by looking that there’s something different about New Smyrna, Florida. Even if they did tell you, you probably wouldn’t believe it. That is, on the surface, New Smyrna doesn’t look that different from all the other beach communities that dot the central Florida coastline. Like the others, it has miles of white sand beaches, pleasant weather, great fishing, and excellent surfing. Without much hesitation, the locals would probably even tell you that New Smyrna has the ‘world’s safest bathing beach.’ The thing the locals probably won’t tell you, the something that makes New Smyrna different, is that New Smyrna is also the shark bite capital of the world.

If you ask the experts why there are so many shark attacks off New Smyrna, the likely answer would be: there’s a lot of people in the water. It’s understandable that a world-class beach would draw crowds. It also would follow that more people in the water would mean a greater chance of something going wrong, like a drowning, jellyfish stings, or even something as remote as a shark attack.

And if you asked the same experts who is at the most risk of an attack, the likely answer would be: surfers. Why surfers? Quite simply, there are lots of surfers in the waters off New Smyrna. And why do they surf New Smyrna? If you ask the wave riders on the east coast where the best surfing and the most consistent break can be found, the likely answer will be: New Smyrna, Florida. But that still doesn’t explain why so many shark attacks and why surfers?

The answer to all these questions: the Ponce Inlet.

The murky waters the surfers love happen to be adjacent to the Ponce de Leon Inlet, where the Halifax River and Intracoastal Canal empty into the Atlantic around the shoulders of stone jetties. These same murky waters, laden with baitfish, draw sharks in their search for an easy meal. And it is this strange coincidence of geography that draws the sharks and the surfers together. Given the right conditions, the surfer’s world above the waves and the shark’s right below are destined to collide. And collide they do. In fact, of the 36 shark attacks that occurred in the United States in 2003, 27 took place in Florida. Of those, 13 were in Volusia County, home of New Smyrna. But those are just statistics--here’s the story of one of those shark attacks.

On the afternoon of September 28th, 2003, 21-yr-old Jimmy Arnold was surfing just south of the Ponce Inlet. Earlier in the day he had participated in a surfing contest and decided to spend the afternoon riding the waves down the shore. The conditions were typical for Florida in the late summer. It was warm, the sun firmly overhead, powering an inshore breeze that was whipping the water into a frothy, murky brown. The tide was going out through the inlet, carrying its load of baitfish out with it. Surfers were scattered about, though not too far from each other. Jimmy was about 150 yards from shore, lying prone on the board, paddling with his hands. His feet were trailing along off the side of the board. That was the last thing he remembered doing before the attack: just paddling, splashing around, and waiting for a wave.

On that September afternoon Jimmy never got a look at the beast that latched down his foot. It happened too fast to realize that it was a shark that had evidently mistaken his foot for an easy meal. When the shark hit, its teeth melted through the flesh, bone, and tendons of Jimmy’s foot, seizing it with a vise-like grip. Almost immediately, the beast tried to pull him straight down with tremendous force. Jimmy likened it to like having several cinder blocks tied to your leg, with its dead weight suddenly jerking him down.

Not consciously knowing what was happening, something in the back of his mind kicked in, perhaps from his years of surfing: it told him to hold on to his board. That unconscious reaction might of saved his life, keeping him buoyant and above the water. The shark held on for a few seconds and then let go. And then it was over.

Or so he thought.

A second later, there was a boil of white water and an explosion of fish jumping out of the water around his surfboard. Sharks were in the area, chasing anything that was moving. It took Jimmy a second to realize what had happened. He didn’t immediately feel the pain but the adrenalin had kicked in. And it only took another second to realize his foot, dripping with blood, was still dangling in the water. The shark had clamped down on the sides and bottom of his left foot, leaving some 25 bloody red slots.

Lightheaded and afraid he might pass out, Jimmy knew he had to get back to the safety of the shore. He yelled to some other surfers but they were too far away to hear over the sound over the wind and waves. He paused for a second and realized he was on his own; he had to paddle back to shore by himself. After a few strokes he saw another explosion of boiling water and baitfish a few feet away from him—the sharks were still around. With his foot bleeding and still in the water, he feared another attack.

Luck was finally with him, though. A wave came by that started to push him ashore. Pulling his legs out of the water, he started the long paddle back to the beach. On the way in, he alerted others that a shark had attacked him.

By the time he came ashore, the beach patrol was there to meet him. They wrapped his foot in a towel and packed ice around it. It only took a few minutes before the crowd appeared. In front of hundreds of onlookers, the shock of what happened set in. He felt nauseated and dizzy. He looked around, with the crowd closing and the din of noise increasing, and all he could see was a white swirl.

After being rushed to the hospital, the doctors numbed his foot, injecting each bite with local anesthetic. Each of those needles hurt more that bite, he thought. It took 50 stitches to close all the wounds.

Seven weeks after the attack, Jimmy went back in the water for the first time since the attack. His foot is about 90% of normal function with a little bit of soreness remaining. Thinking about getting back in the water, surfing again, isn’t easy. He said, ‘It’s kind of scary.’

Looking back, Jimmy doesn’t know why the shark attacked that day. He thought it might have something to do with the surfboard leash on left foot, which attaches right above the ankle. Maybe that small thing, breaking up the outline of his foot, was what confused the shark and led to the attack. Maybe.

If you look at the facts behind the attacks similar to Jimmy’s, most seem to be related to the surfer’s posture and actions in the water--lying on the board, arms and legs hanging off the side, paddling around and splashing. Off the cold waters of California’s coast, it is just these actions, just this silhouette, which great white sharks seem to confuse for seals and sea lions. But in these warm murky waters off New Smyrna, there are no seals, sea lions or similar prey in the surf zone. What is known is that the bull, black tip, tiger and reef sharks that frequent these waters use the confusion of poor visibility and strong currents to their advantage when they hunt for prey. Most of the attacks on humans off Florida are unprovoked ‘hit and run’-type encounters, leaving the victim with a single bite or rake mark (like Jimmy). It seems that the shark realizes it has made a mistake in attacking something other than its normal prey and quickly lets it go.

It’s like being in the wrong place at the wrong time doing the wrong thing. And that’s the truth. Just don’t ask the locals.