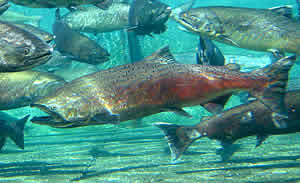 RICHLAND, Washington -- Basic ocean conditions such as current directions and water temperature play a huge role in determining the behavior of young migrating salmon as they move from rivers and hit ocean waters for the first time, according to new research. The findings inform restoration policies and practices focused on boosting endangered salmon species in the Pacific Northwest.

The findings, from ecologists at the Department of Energy's Pacific Northwest National Laboratory, focus on a perilous period in the life of salmon. After their birth in fresh water, salmon migrate to the ocean, where they must quickly adapt to an environment unlike anything they've experienced before â deep water full of new predators, with strong currents and competition from all sides.

How the fish fare during their first few weeks in the ocean has a profound impact on species' ability to survive into adulthood.

The results show that young salmon scatter in all directions as they first enter the ocean, which is contrary to previous assumptions that most salmon head north immediately after leaving the Columbia River. "It's becoming clear that the first few weeks after salmon enter the ocean from their freshwater homes is a crucial time," said Geoff McMichael, the PNNL scientist who led the study, which was published recently in Animal Biotelemetry.

"Much of their health and the success of their subsequent runs upstream to start the next generation are dictated by those first few weeks in the ocean. Conditions such as water temperature, food availability and the number of predators are critical. Everything we can learn about salmon behavior during this critical time could help managers restore their stocks more effectively," added McMichael.

The team found that much of the fish's initial behavior and chance of survival were determined by factors beyond anyone's control, such as the movement of ocean currents. Under certain conditions, for instance when the ocean is unusually warm, Pacific hake â a fish that McMichael calls a "voracious predator" â are more likely to come closer to the mouth of the river and feast on salmon.

"There is really great real-time data available to inform us about conditions in the ocean, and that information is key for predicting how salmon will fare as they enter the ocean at any given time," said McMichael. "Perhaps we can take advantage of that data to determine optimal conditions for releasing hatchery-raised salmon, for instance, and when to hold back."

The study provides a snapshot of salmon behavior at a crucial time, after a migration from their freshwater birthplaces to the ocean, a journey often hundreds of miles long. Depending on the species and their age, the fish generally travel anywhere from 20 to 60 miles a day, carried by the current as they navigate much of the journey backwards â tail first.

Previous studies had indicated that as they exit the Columbia River, most salmon head north up the coast of Washington state, essentially turning right as they exited the Columbia. But the new study showed that while many salmon, especially the youngest, head north, many others head straight out to the ocean, and many others head south. This indicates that the number of salmon safely reaching the ocean may have been undercounted in previous studies, since researchers focused their monitoring efforts toward the north, McMichael said.

The study also showed that the length of time that fish stay in the transition zone between the mouth of the river and the ocean varies greatly as well. Steelhead are more likely to bolt straight into the ocean within a few hours, while the youngest Chinook salmon, less than a year old, are likely to go back and forth a bit for a few days before committing to ocean life.

A surprising finding was that the biggest, strongest, fastest fish in the study â steelhead were also most likely to become lunch for a predator. The team did not examine why. One possibility is those fish are more vulnerable to birds like terns and cormorants, since steelhead swim closer to the surface than Chinook salmon. To do the study, McMichael's team used an elaborate fish-tagging system known as the Juvenile Salmon Acoustic Telemetry System that he and others have developed over the last 10 years. Ecologists implanted tiny, battery-powered tags smaller than a pencil eraser into more than 8,159 fish migrating down the Columbia, the nation's fourth-largest river, and released those fish at one of four sites anywhere from about 140 to 245 miles upstream from the ocean. As the fish swam, the acoustic tags inside them emitted tiny, unique beeps that were picked up by underwater receivers that collect and store the data.

The team set up several arrays of receivers along the Columbia, at its mouth, and also in the ocean. There, 20 detectors were dropped near the ocean floor, each about 1.5 miles from the next, about nine miles from the mouth of the Columbia. Ultimately, 1,701 of the original fish, or about 21 percent, were subsequently detected as they entered the ocean. Most of the rest of the fish likely went undetected through gaps in the sparse detection system.

The tags the team used are battery-powered "active" tags that emit signals every few seconds for at least 30 days. The closer to the detector that a fish swims, the more likely it is to be detected; depending on the noisiness of the environment, the signals can be detected up to 250 meters away in the ocean. That's much further and provides much more information than "passive" tags, where fish must swim within a few feet of a detector.

The latest study would have been difficult to do with a passive tag, since such systems detect just a tiny fraction of the fish compared to the JSATS system. Passive systems also require an extensive infrastructure which would be nearly impossible to establish over such a large part of the ocean as the current study, where sparse equipment detected fish around much of the perimeter surrounding approximately 100 square miles of water.

The PNNL tags are also much smaller than other active tags, allowing the team to monitor much smaller, younger fish. Altogether, the study produced several hundred million pieces of data about the behavior of newly arriving salmon into the ocean.

McMichael's work tracking the movements of salmon from the Columbia and into the ocean was supported by the Portland district of the U.S. Army Corps of Engineers. Other authors of the report include PNNL scientists Amanda C. Hanson, Ryan A. Harnish and Donna M. Trott.