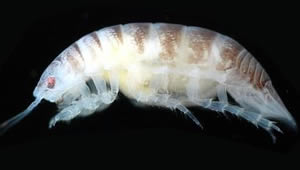 MADRID, Spain -- Researchers at the Spanish Intitute of Oceanography (IEO) have described a new species to science, the third species described to date in the El Cachucho Marine Protected Area. After scientific community acceptance of the isopod Haplomesus longiramus and the amphipod Liropus cachuchoensis, scientists at the ECOMARG research group have published (IEO?) the taxonomic and ecological description of Politolana sanchezi, a small crustacean that inhabits the southern Bay of Biscay.

Inmaculada Frutos, researcher at the Spanish Institute of Oceanography (IEO), and Jean Claude Sorbe, from the National Center for Scientific Research of France (CNRS), recently published in the journal Zootaxa the taxonomic and ecological description of a new species to science: Politolana sanchezi.

This isopod crustacean is the third species that scientists of the ECOMARG research group describe and publish from the El Cachucho Marine Protected Area.

Politolana sanchezi measures about two centimeters and lives in soft bottoms of the southern Bay of Biscay and western Galicia, between 480 and 829 meters depth.

The small crustacean is able to burrow down to 5 cm in muddy bottoms and to swim up to least the 1 m water layer above the sea floor. According to a trophic experiment carried out with a fish-baited trap fitted on a photogrammetric sled, it shows a scavenging and bioturbating behaviour.

The studied specimens were sampled during ESSAIS and PROSECAN French cruises and ECOMARG03 and ECOMARG04 Spanish cruises with different sampling devices (two suprabenthic sleds, a photogrammetric sled and a box-corer).

El Cachucho is a hotspot of biodiversity where, only talking about the crustaceans, more than 40 species are putatively news to science and shows a density of organisms not mentioned before in surrounding areas of the Cantabrian Sea. With Politolana sanchezi three species have been described in the last years of research. The description process is quite slow. It is not only to describe the animal and distinguish their features, but the results should be evaluated by the scientific community to be really sure that the species was not cited in other areas of the world.