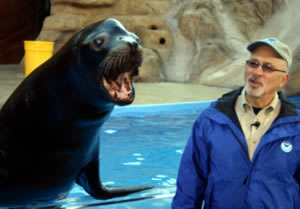 “What Smokey Bear did for our nation’s forests, Sanctuary Sam has the potential to do, making ocean issues real for all Americans,” said Daniel J. Basta, director of the sanctuary program, at a news conference at Sea World kicking off the campaign. “The future health of our oceans depends on all of us caring and taking action. Sam’s charge is to help bring that message to the nation.”

Appearing in a variety of communications and educational vehicles, Sanctuary Sam will help convey important messages to the American public — particularly children — about the marine environment, highlighting the current problems facing the oceans, including pollution, marine debris and habitat destruction.

As part of this ocean awareness campaign, two public service announcements for television and Internet are being released, featuring the messages “don’t trash where you splash” and “be wildlife wise.” Sanctuary Sam offers tips on ways humans can be better ocean stewards by not throwing trash in the ocean and not disturbing marine life, such as marine mammals, in the wild. Sanctuary Sam will also spread the word about the important role of marine sanctuaries in protecting and preserving our ocean’s natural and cultural resources.

With a Web page and blog already live on MySpace.com, Sanctuary Sam’s likeness and messages will also appear in the National Marine Sanctuaries Program and OceansLive Web sites, and in school materials, such as lesson plans, posters, bookmarks, and DVDs. Also in production are two more public service announcements for television and the Internet featuring Sanctuary Sam and friends.

The Sanctuary Sam campaign will primarily use Sam’s image in photos, videos and cartoon drawings. A number of sea lions around the country will portray Sanctuary Sam at live events taking place at their home aquaria.