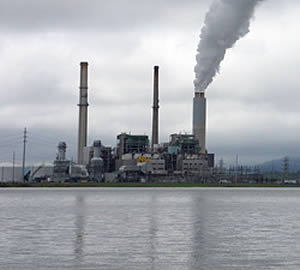 Scientists has found fish farther from coal-fired plants have higher mercury levels than fish closer to the plants.

RALEIGH, North Carolina -- A new study from North Carolina State University finds that fish located near coal-fired power plants have lower levels of mercury than fish that live much further away. The surprising finding appears to be linked to high levels of another chemical, selenium, found near such facilities, which unfortunately poses problems of its own.

"We found that fish in lakes located at least 30 kilometers (km) from a coal-fired power plant had mercury levels more than three times higher than fish of the same species in lakes that are within 10 km of a plant," says Dana Sackett, a Ph.D. student at NC State and the lead author of a paper describing the study. "This information will inform health and wildlife officials who make determinations about fish consumption advisories and wildlife management decisions."

The findings are surprising because coal-fired power plants are the leading source of mercury air emissions globally, and a significant amount of that mercury is expected to settle out of the air within 10 km of a plant's smokestacks. Mercury is a bioaccumulative toxin that builds up in animal tissues â including fish â and can pose public health problems related to fish consumption.

The researchers examined largemouth bass and bluegill from 14 freshwater lakes â seven within 10 km of a plant and seven that were a minimum of 30 km from a plant. The species were chosen because they are commonly caught and eaten by recreational anglers, and because they represent two very different places in the food chain. Largemouth bass are apex predators at the top of the food chain, which consume smaller fish. As a result, since mercury builds up in the food chain, they would be expected to show higher levels of mercury. Bluegill are smaller fish that primarily dine on invertebrates, such as insects, and would be expected to show lower levels of mercury.

The researchers found that the mercury levels went up more than threefold in both species at lakes located further from the power plants, meaning that the location effect impacts fish regardless of their place in the food chain.

Selenium, which is also emitted by coal-fired plants, is known to have an antagonistic relationship to mercury, though the specific mechanisms at play are not clearly defined. In other words, the selenium prevents fish from accumulating high levels of mercury, and we're still working on the specifics of how that happens.

However, while lower mercury levels are a good thing, higher levels of selenium pose their own risks. "Selenium is an important dietary element," says Dr. Derek Aday, associate professor of biology at NC State and a co-author of the paper. "But at high levels, it can have serious consequences â including lethal effects and an array of health problems for fish and wildlife."