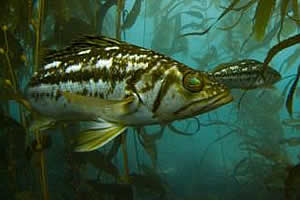 SAN DIEGO, California -- The two most important recreational fisheries off Southern California have collapsed, according to a new study led by a researcher from Scripps Institution of Oceanography at UC San Diego.

Scripps postdoctoral researcher Brad Erisman and his colleagues examined the health of regional populations of barred sand bass and kelp bass-staple catches of Southern California's recreational fishing fleet-by combining information from fishing records and other data on regional fish populations. Stocks of both species have collapsed due to a combination of overfishing of their breeding areas and changes in oceanographic conditions, the researchers found.

As they describe in the most recent edition of the Canadian Journal of Fisheries and Aquatic Sciences, the researchers say the total amount, or biomass, of each bass species decreased 90 percent since 1980. Yet fisheries catch rates have remained stable for a number of years, even as overall population sizes dropped drastically. This is due, the authors say, to a phenomenon known as "hyperstability" in which fishing targets spawning areas at which large numbers of fish congregate, leading to a misleading high catch rate and masking a decline in the overall population.

"The problem is when fish are aggregating in these huge masses, fishermen can still catch a lot each trip, so everything looks fine-but in reality the true population is declining," said Erisman, a member of the Scripps Center for Marine Biodiversity and Conservation. "So as the true abundance is declining, the fisheries data used to assess the health of the fisheries are not showing that and give no indication of a collapse-this is referred to as 'the illusion of plenty.'"

Erisman says the cod fishery that collapsed in the North Atlantic Ocean is the world's most famous example of fisheries data masking an impending collapse, but other fish stocks in regions where fish congregate to spawn are declining as well.

In order to grasp a clear picture of the true health of the barred sand bass and kelp bass in Southern California, Erisman and his colleagues looked outside fisheries data. They tapped into fish population numbers tracked by power plant generating stations, which are required to log fish entrapments as part of their water cooling systems, and underwater visual censuses conducted by Occidental College since 1974.

The authors acknowledge that both bass species began declining in the early 1980s, a drop other studies have directly linked with a climatic shift in regional water temperatures. But they say fishing impacts exacerbated the declines.

"The combined evidence from this study indicates that persistent overfishing of seasonal spawning aggregations by recreational fisheries brought about the collapse of barred sand bass and kelp bass stocks in Southern California," the authors write in their paper.

"The relationship between catch rate and stock abundance suggests there is an urgent need to incorporate fisheries-independent monitoring to create something sustainable and monitor the fisheries effectively," said Erisman. "While fisheries monitoring remains a key part of management, it is clear that such data alone do not provide an accurate assessment of stock condition."