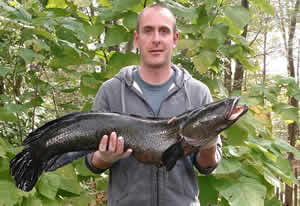 The Maryland Department of Natural Resources has confirmed that Michael Meade of Upper Marlboro, Maryland set a new state sport fish record with a 17.49-pound northern snakehead while fishing with bow and arrow along the marshes of Mattawoman Creek.

"It was about 10:30 at night when I brought it onboard, and it was the biggest snakehead I had ever seen," Meade said. "When I got home, I stepped on a bathroom scale with the fish, and it was over 17 pounds. So, I put it in a bucket of ice water and went looking for a certified scale."

World and state fishing records are normally awarded only for fish caught by rod and reel. Maryland makes an exception for three invasive fish species: northern snakehead, blue catfish and flathead catfish. These species may be caught by any legal recreational harvest method and considered for state record recognition, but only if the fish is dispatched and kept.

To report a potential record catch, call 443-569-1381 or 410-260-8325. Anglers should keep their fish immersed in ice water to preserve its weight until it can be weighed at a seafood retailer, a grocery store, or tackle shop with a certified scale. Fish caught from privately-owned, fee-fishing waters are not eligible for record consideration. The Maryland State Record application and a list of records are on the DNR Fisheries website.

As for the new state record snakehead, Meade says, "I will bake the fillets with pepper and butter, enough for two or three meals, I expect."