Scientists: Coral Diseases Might Not Be Contagious; No 'Clusters Of Sick Colonies' 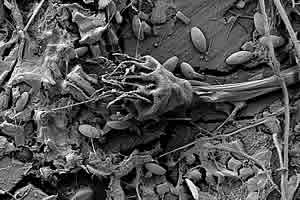 Suctorian ciliate covered with symbiotic bacteria, along with diatoms, and filaments on weathered and cracked microplastic debris. credit Erik Zettle

WOODS HOLE, Massachusetts -- Scientists have discovered a diverse multitude of microbes colonizing and thriving on flecks of plastic that have polluted the oceansâa vast new human-made flotilla of microbial communities that they have dubbed the "plastisphere."

The collaborative team of scientistsâErik Zettler from Sea Education Association (SEA), Tracy Mincer from Woods Hole Oceanographic Institution (WHOI), and Linda Amaral-Zettler from the Marine Biological Laboratory (MBL), all in Woods Hole, Mass.âanalyzed marine plastic debris that was skimmed with fine-scale nets from the sea surface at several locations in the North Atlantic Ocean during SEA research cruises. Most were millimeter-sized fragments.

"We're not just interested in who's there. We're interested in their function, how they're functioning in this ecosystem, how they're altering this ecosystem, and what's the ultimate fate of these particles in the ocean," says Amaral-Zettler. "Are they sinking to the bottom of the ocean? Are they being ingested? If they're being ingested, what impact does that have?"

Using scanning electron microscopy and gene sequencing techniques, they found at least 1000 different types of bacterial cells on the plastic samples, including many individual species yet to be identified. They included plants, algae, and bacteria that manufacture their own food (autotrophs), animals and bacteria that feed on them (heterotrophs), predators that feed on these, and other organisms that establish synergistic relationships (symbionts). These complex communities exist on plastic bits hardly bigger than the head of a pin, and they have arisen with the explosion of plastics in the oceans in the last 60 years.

"The organisms inhabiting the plastisphere were different from those in surrounding seawater, indicating that plastic debris acts as artificial 'microbial reefs," says Mincer. "They supply a place that selects for and supports distinct microbes to settle and succeed."

These communities are likely different from those that settle on naturally occurring floating material such as feathers, wood, and microalgae, because plastics offer different conditions, including the capacity to last much longer without degrading.

On the other hand, the scientists also found evidence that microbes may play a role in degrading plastics. They saw microscopic cracks and pits in the plastic surfaces that they suspect were made by microbes embedded in them, as well as microbes possibly capable of degrading hydrocarbons.

"When we first saw the 'pit formers' we were very excited, especially when they showed up on multiple pieces of plastic of different types of resins," said Zettler, who added that undergraduate students participating in SEA Semester cruises collected and processed the samples. "Now we have to figure out what they are by [genetically] sequencing them and hopefully getting them into culture so we can do experiments."

The plastic debris also represents a new mode of transportation, acting as rafts that can convey harmful microbes, including disease-causing pathogens and harmful algal species. One plastic sample they analyzed was dominated by members of the genus Vibrio, which includes bacteria that cause cholera and gastrointestinal maladies.