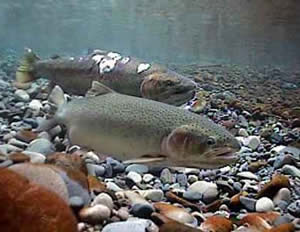 CORVALLIS, Oregon -- Steelhead trout that are originally bred in hatcheries are so genetically impaired that, even if they survive and reproduce in the wild, their offspring will also be significantly less successful at reproducing, according to a new study published today by researchers from Oregon State University.

The poor reproductive fitness – the ability to survive and reproduce – of the wild-born offspring of hatchery fish means that adding hatchery fish to wild populations may ultimately be hurting efforts to sustain those wild runs, scientists said.

The study found that a fish born in the wild as the offspring of two hatchery-reared steelhead averaged only 37 percent the reproductive fitness of a fish with two wild parents, and 87 percent the fitness if one parent was wild and one was from a hatchery. Most importantly, these differences were still detectable after a full generation of natural selection in the wild.

The effect of hatcheries on reproductive fitness in succeeding generations had been predicted in theory, experts say, but until now had never been demonstrated in actual field experiments.

"If anyone ever had any doubts about the genetic differences between hatchery and wild fish, the data are now pretty clear," said Michael Blouin, an OSU professor of zoology. "The effect is so strong that it carries over into the first wild-born generation. Even if fish are born in the wild and survive to reproduce, those adults that had hatchery parents still produce substantially fewer surviving offspring than those with wild parents. That's pretty remarkable."

An earlier report, published in 2007 in the journal Science, had already shown that hatchery fish that migrate to the ocean and return to spawn leave far fewer offspring than their wild relatives. The newest findings suggest the problem does not end there, but carries over into their wild-born descendants.

The implication, Blouin said, is that hatchery salmonids – many of which do survive to reproduce in the wild– could be gradually reducing the fitness of the wild populations with which they interbreed. Those hatchery fish provide one more hurdle to overcome in the goal of sustaining wild runs, along with problems caused by dams, loss or degradation of habitat, pollution, overfishing and other causes.

Aside from weakening the wild gene pool, the release of captive-bred fish also raises the risk of introducing diseases and increasing competition for limited resources, the report noted.

This research, which was just published in Biology Letters, was supported by grants from the Bonneville Power Administration and the Oregon Department of Fish and Wildlife. It was based on years of genetic analysis of thousands of steelhead trout in Oregon's Hood River, in field work dating back to 1991. Scientists have been able to genetically "fingerprint" three generations of returning fish to determine who their parents were, and whether or not they were wild or hatchery fish.

Fish that do well in the safe, quiet world of the hatcheries are selected to be different than those that do well in a much more hostile and predatory real-world environment. Using wild fish as brood stock each year should lessen the problem, but it was just that type of hatchery fish that were used in the Hood River study. This demonstrates that even a single generation of hatchery culture can still have strong effects.

Although this study was done with steelhead trout, it would be reasonable to extrapolate its results to other salmonids, researchers said. It's less clear what the findings mean to the many other species that are now being bred in captivity in efforts to help wild populations recover, Blouin said, but it's possible that similar effects could be found.

Captive breeding is now a cornerstone of recovery efforts by conservation programs for many threatened or endangered species, the researchers noted in their report. Thousands of species may require captive breeding to prevent their extinction in the next 200 years – which makes it particularly important to find out if such programs will ultimately work. This study raises doubts.

"The message should be clear," the researchers wrote in their report's conclusion. "Captive breeding for reintroduction or supplementation can have a serious, long-term downside in some taxa, and so should not be considered as a panacea for the recovery of all endangered populations."