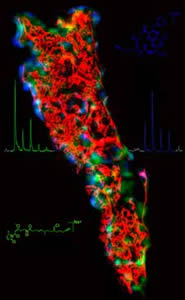 A thin section of marine sponge is highlighted with red indicating the presence of cyanobacteria and algae living within the the sponge.

SAN DIEGO, California -- With the number of terrestrial sources that yield novel treatments for human disease decreasing year by year, the oceans have been tapped as a promising resource for discovering new natural biomedicines. Two studies by scientists at UC San Diego, each utilizing mass spectrometry in novel ways, have helped narrow the gap in identifying potent natural compounds from the sea that could one day treat diseases such as cancer. The research, published in the journals Proceedings of the National Academy of Sciences (PNAS) and Molecular Biosystems, was led by research groups headed by William Gerwick of the Center for Marine Biotechnology and Biomedicine at Scripps Institution of Oceanography at UC San Diego and the UCSD Skaggs School of Pharmacy and Pharmaceutical Sciences, and Pieter Dorrestein of the UCSD Skaggs School.

Because the ocean environment offers a wealth of new sources for future therapeutic products, marine biologists and chemists have been seeking ways to identify the specific processes that produce such compounds within sponges, mollusks and other marine invertebrates. In the March issue of the journal Molecular Biosystems, the scientists describe success in using new technology called natural product MALDI-TOF (Matrix Assisted Laser Desorption Ionization-Time of Flight) imaging mass spectrometry, an imaging technique that can uniquely probe the inner workings of marine organisms.

In the case of marine sponges, researchers often have trouble deciphering whether the therapeutic compounds they produce are being manufactured by the sponge, bacteria within the sponge, or a combination of the two in a symbiotic relationship. In the PNAS paper, published in February, researchers T. Luke Simmons, Gerwick, Dorrestein and their colleagues probe such production issues, or "biosynthetic origins," and review a variety of traditional and emerging techniques being used to localize the molecular machinery responsible for potential new drug products.

"Sea hares, for example, eat cyanobacteria (blue-green algae) and we know for a fact that they assimilate their chemistry," said Gerwick. "With sponges, there are communities of organisms living within them. What we need to find out is: within those communities, who really possesses the genes to make the critical compounds?"

One technique being used to decipher that question is mass spectrometry, which deciphers the size, structure and properties of molecules. Natural product MALDI-TOF imaging mass spectrometry (npMALDI-I), as described in the Molecular Biosystems paper, allowed the researchers to uniquely peer into algae and sponges, narrowing the locations where beneficial molecules are being created. They created a "map" across algae and sponge tissue samples. Traditional mass spectrometric methods are not able to ionize organic molecules directly from sponge tissue in this manner, and hence, development of natural product npMALDI-I mass spectrometry has been a critical development.

Utilizing the novel technology, the UC San Diego team pinpointed clusters of known and unknown molecules from marine cyanobacteria and within a cross-section of a sponge, some of which have promising therapeutic properties.

Knowing that co-existing microorganisms tend to populate specific regions of sponge tissue, correlating the sites where the organic molecules were found to these specific regions suggests that "the microorganisms are responsible for the production of at least some of the compounds," explained Dorrestein. "An analytical approach such as this may become useful in the discovery of the organisms that are responsible for the production of natural products that can be used to treat diseases."

"Ultimately, we need to know who holds the genes that produce the promising compounds," said Gerwick. "That's a fundamental question with lots of implications. It's been very difficult to answer, but now we are showing that mass spectrometry offers some new ways to interrogate these kinds of issues."

In addition to Simmons, Gerwick and Dorrestein, the Molecular Biosystems paper was coauthored by Eduardo Esquenazi, Cameron Coates and David Gonzalez. Authors of the PNAS paper, in addition to Simmons, Gerwick and Dorrestein, included Coates, Benjamin Clark, Niclas Engene, Gonzalez and Esquenazi. Funding for the studies was provided by the National Institutes of Health, the American Cancer Society and the UCSD Skaggs School of Pharmacy and Pharmaceutical Sciences.