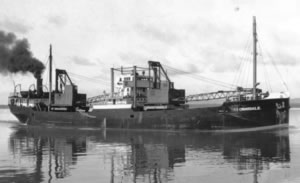 Photo of the tanker Ormidale, later renamed Bluefields, which was torpedoed and sunk in 1942 by German submarine U-576. Credit: Bowling Green State U.

SILVER SPRING, Maryland -- NOAA will lead a summer research expedition to locate and study World War II shipwrecks sunk in 1942 off North Carolina during the Battle of the Atlantic, specifically the Battle of Convoy KS-520. The shipwrecks are located in an area known as the "Graveyard of the Atlantic," which includes sunken vessels from U.S. and British naval fleets, merchant ships and German U-boats.

"This summer will be the most ambitious of our Battle of the Atlantic research expeditions, and potentially the most exciting," said David W. Alberg, superintendent, USS Monitor National Marine Sanctuary. "This expedition is all about partnerships, collaboration and using cutting edge technology to search for and document historically significant shipwrecks tragically lost during World War II."

On July 14, 1942, a merchant convoy of 19 ships and five military escorts left Hampton Roads, Va., sailing south to Key West, Fla., to deliver cargo to aid the war effort. The next day, off Cape Hatteras, N.C., Convoy KS-520 was attacked by German submarine U-576. The convoy fought back with an American warship ramming the U-boat while U.S. Navy aircraft dropped depth charges that sunk the submarine.

Alberg said NOAA's expedition, taking place in several phases beginning on June 1, will build on work conducted by NOAA's Office of National Marine Sanctuaries (ONMS) during the past three summers to document and preserve an important part of North Carolina's history. The 2011 Battle of the Atlantic expedition survey will be conducted in four phases aboard the ONMS Research Vessel 8501.

Many of the World War II wrecks off North Carolina, some lying as shallow as 100 feet, serve as popular recreational dive sites and are visited by thousands of divers each year. Unfortunately, some of these wrecks have been severely damaged over the years by human activity. Both NOAA and the recreational diving community promote open access to the shipwrecks and encourage responsible dive behavior and preservation of underwater resources for future generations to enjoy.

ONMS is leading the 2011 Battle of the Atlantic expedition survey with support and technical expertise from its Maritime Heritage Program, NOAA's Office of Ocean Exploration and Research, NOAA's National Centers for Coastal Ocean Science, the Bureau of Ocean Energy Management, Regulation, and Enforcement, and the National Park Service. Additional partners include East Carolina University, the University of North Carolina Coastal Studies Institute, the state of North Carolina, the Renaissance Computing Institute, the Cooperative Institute for Ocean Exploration, Research, and Technology, the North Carolina Department of Transportation Ferry Division, and Dare County GovEd TV.