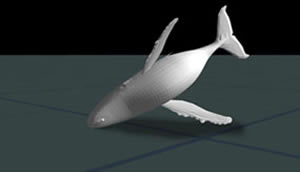 The study further states that the observed feeding behavior also leads to vulnerability to entanglement in bottom set fishing gear, an issue which is a major mortality factor for the species. This finding reaffirms a NOAA Fisheries regulation that mandates the use of sinking line between fishing traps used in the lobster fishery as a way of reducing entanglements.

The new findings follow earlier NOAA-led studies detailing so-called "bubble net" feeding behaviors near and at the surface. Bubble net feeding is a behavior in which humpback whales corral and contain fish into a small area by trapping them in nets of air bubbles so they can more efficiently scoop them up in their large filter-feeding mouths.The behaviors are used by individual animals and as part of coordinated feeding behaviors involving two or more animals.

"Tagging technology is allowing us to observe whales underwater, much as land-based biologists study animal subjects in their specific environments," said David Wiley, sanctuary research coordinator and a co-author on the paper. "The data have allowed us to detect new feeding techniques as well as nuances in those behaviors. We have determined that bottom feeding is a much more commonly used technique than the more well known bubble net behaviors."

Bottom side-rolling feeding was previously hypothesized from observations of scars on the jaws of humpback whales and from earlier tagging projects. In the recent studies, researchers showed that this behavior happens for extensive periods of time at or near the seafloor, that it occurs in the presence of concentrations of sand lance (a preferred prey fish), and that the behavior is accompanied by the expansion of the animal's ventral (throat) pleats.

Information was collected through the use of DTAGs (synchronous motion and acoustic recording tags) and Crittercamâ ¢, National Geographic Society's underwater video and audio recording system.

"By visualizing the data with TrackPlot, we can actually see how the whale moves underwater and this enables us to discover different kinds of foraging behaviors," said lead author Colin Ware of the University of New Hampshire's Center for Coastal and Ocean Mapping. TrackPlot is a custom software tool for DTAG data that produces a ribbon-like image in three dimensions. "With these 3-D visualizations, we can follow the path of the whale from surface to seafloor along with all of the pitch, roll and heading changes while underway. By adding Crittercam video, we now get a more complete understanding of these various bottom feeding techniques," Ware said.

A side-roll is defined as a roll of between 45 and 135 degrees from a normal orientation along the seafloor - the most common version uses a 90 degree roll with a downward head pitch of about 30 degrees, which matches favorably with earlier speculative sketches of bottom feeding. A side-roll inversion involves rolls that continue past the 135 degree orientation position. One humpback used a technique that employed a repetitive sequence of moves approximately every 20 feet during which the animal rolled from a 90 degree position to an inverted position, with some 10 to 17 of these "scoops" per dive.

Sand lance, also known as sand eels, tend to burrow into the sandy sediments at night or form nighttime horizontal schools close to the seafloor. In addition, Crittercam footage indicates that sand lance can form dense mats along the seabed during the day. The side roll feeding technique with extended pleats emphasizes width rather than height, resulting in more efficient feeding when encountering prey at or near the seafloor. Coordinated feeding may also help cluster prey or simply ensure that it does not escape. Crittercam footage also showed for the first time a head-to-head orientation for two animals that were side-rolling at the seafloor.

While this humpback bottom feeding behavior occurs at relatively slow speeds, it does involve the expansion of ventral pleats, which was once thought to require high speeds, as in lunging. The researchers theorize that humpback side rolls may be similar to the feeding technique of gray whales in the Pacific. The three types of bottom feeding techniques may be due to different prey distributions or may just reflect individual preferences between whales.