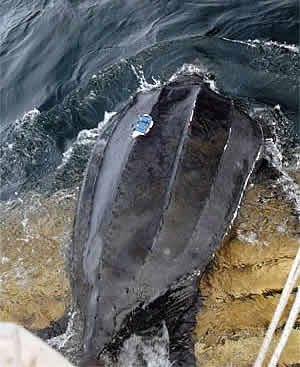 A leatherback turtle captured off the coast of Halifax, Nova Scotia slips into the water after being tagged with a satellite transmitter

NOVA SCOTIA, Canada -- That old Aesop’s fable about the turtle and the hare might have you underestimating the turtle; after all, that hare would have won if only it stayed on track—right?

Fact is, while turtles are slow and clumsy on land, they can travel great speeds for vast distances in the ocean—as the Great Turtle Race will undoubtedly show. For the race, 11 endangered leatherback turtles are being tracked from their feeding areas in the chilly waters off Atlantic Canada to breeding areas in the warm, tropical waters of the Caribbean: a distance of 6,000 kilometres on average.

The race officially kicked off Thursday, April 16, and finishes in two weeks’ time. Race fans will be able follow the competitors’ progress on a race map updated daily at www.greatturtlerace.org.

Each of the competing leatherbacks—including both males and females, mature and juvenile turtles—are sponsored by the likes of R.E.M. and Pearl Jam. Olympic swimmers, including gold medalists Janet Evans, Jason Lezak and Eric Shanteau, will act as “coaches” for the contestants and Olympian-turned-analyst Rowdy Gaines will be calling the race on the website.

“People need to know more about these amazing animals—they’re endangered and they need protection,” says Paul Robert MacDonald, a Dalhousie University student who was part of the field research team which attached satellite transmitters to the animals off the waters of Nova Scotia back in July. “So it’s definitely cool that the rock bands are onboard—it gets mainstream attention and makes people that much more aware.

“I’ve already met the turtles. I wonder if I could meet R.E.M. too?”

Just heading into an exam on differential equations, the 22-year-old mathematics and biology major was happy to take a break to talk about the summer job of a lifetime. Working as part of a team with the Canadian Sea Turtle Network under Mike James, director of science for the network and adjunct professor at Dalhousie University, the job was to study the foraging behavior of leatherbacks. Working with fishermen, the researchers would identify leatherbacks and bring some aboard the fishing boat for further study: taking measurements of their carapace, body length and weight, taking DNA samples, and of course, attaching the satellite transmitters to their shells.

Leatherbacks are the largest turtles on Earth with evolutionary roots that go back more than 100 million years. But their numbers, particularly in the Pacific, are declining at an alarming rate due to egg harvest, fishery bycatch, coastal development, and highly variable food availability.

“These turtles have one of the oldest family trees in the world and so much is unknown about them,” says Mr. MacDonald, who is graduating this spring. “The tags give us an accurate depiction of their migration routes, distances, averages speeds, depth of diving … the race is cool and everything, but this is data that can be used.”

Last summer, the researchers came across the largest leatherback Dr. James had ever seen: a 1,400-pound female the researchers nicknamed “Bruiser.” As they brought the leatherback aboard, its weight strained the platform they work from, attached to the back of the fishing boat.

“It was fast and furious—we were really scrambling,” says Dr. James, who can’t help but root for Bruiser, renamed “Wawa Bear,” in the race.

“They’ve had two previous races like this before, but this is the first time they’ve looked at the leatherbacks’ movements from north to south,” says Dr. James, whose pioneering work is featured in the current issue of National Geographic.

“So I think it’s a great opportunity to enhance awareness of these animals in Canada; they spend months in the waters off Atlantic Canada foraging before returning south. The race will really let you see them moving these vast distances in the ocean.”

The actual journeys take months to complete, but have been condensed to two weeks for the purpose of the race.

“The fate of sea turtles, the global marine environment and humanity itself are inextricably tied to the choices we make today,” says Pearl Jam guitarist Stone Gossard in a press release from the Canadian Sea Turtle Network. “We’re happy to be a part of the Great Turtle race, and we are encouraging all our fans and friends to join the fun, cheer on our turtle, and help save the seas.”