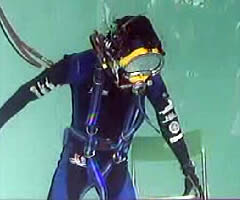 This time, he wants to break the Guinness World Record for the world's longest scuba dive.

"I think trying something new, something that I've never done before has always been the trait of my expeditions or adventures. So, having climbed the mountains, been to the cold places, done cycling and swimming, I thought the next logical thing was to go underwater. And this is the result," said the Singapore adventurer.

Khoo plans to take the dive from December 16-25. That is a total of 10 days, during which, he will not be allowed to surface.

He is allowed to take a five minute break every continuous 60 minutes.

He will face several challenges like dehydration, nausea and vertigo but the seasoned adventurer thinks boredom would be the toughest.