Scientists Study Subseafloor Sediment In South Pacific Gyre; 'We Deliberately Went Where No One Ever Goes' 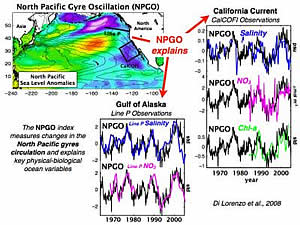 ATLANTA, Georgia -- Scientists at the Georgia Institute of Technology have discovered a new climate pattern called the North Pacific Gyre Oscillation. This new pattern explains, for the first time, changes in the water that are important in helping commercial fishermen understand fluctuations in the fish stock. They’re also finding that as the temperature of the Earth is warming, large fluctuations in these factors could help climatologists predict how the oceans will respond in a warmer world. The research appears in April 30 edition of the journal Geophysical Research Letters.

“We’ve been able to explain, for the first time, the changes in salinity, nutrients and chlorophyll that we see in the Northeast Pacific,” said Emanuele Di Lorenzo, assistant professor in Georgia Tech’s School of Earth and Atmospheric Sciences.

Since 1945, fishermen in the California current of the Pacific Ocean have been tracking temperature, salinity and nutrients, among other things, in the ocean to help them predict changes in fish populations like sardines and anchovies that are important for the industry. Studying this data, along with satellite images, Di Lorenzo discovered a pattern of current that he named the North Pacific Gyre Oscillation.

Recent satellite data suggest that this current is undergoing intensification as the temperature of the Earth has risen over the past few decades.

"Although the North Pacific Gyre Oscillation is part of a natural cycle of the climate system, we find evidence suggesting that its amplitude may increase as global warming progresses," said Di Lorenzo.

If this is true, this newly found climate pattern mey help scientists predict how the ecosystem of the Pacific Ocean is likely to change if the world continues to warm, as predicted by the Intergovernmental Panel on Climate Change.