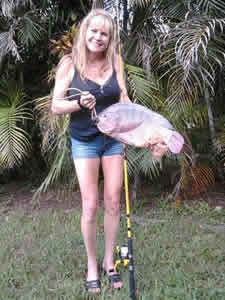 Pam Henry was fishing off her dock on the St. Lucie River in Martin County when she caught this state-and world-record blue tilapia. credit Pam Henry

TALLAHASSEE, Florida -- It's official. Pamela Henry of Stuart broke state and world records when she reeled in a 9.6-pound blue tilapia last August. The fish measured 24 inches long. A taxidermist is mounting the record-breaking fish.

The Florida Fish and Wildlife Conservation Commission (FWC) recently certified the fish as the largest caught recreationally in state waters. Additionally, the International Game Fish Association issued the all-tackle world record for the species to Henry.

Henry was fishing off her dock last August in the south fork of the St. Lucie River in Martin County when she caught the big fish. She was using a bread ball and was fishing at night.

"I've been fishing my whole life, so it was always my mission to catch a record blue tilapia," said Henry. "I had researched the minimum weight, so I knew what I was looking for."

Blue tilapia are abundant throughout central and southern Florida. They feed primarily on plankton and small organisms living in or on the bottom. As a result, blue tilapia are not known for their angling quality. However, some urban anglers catch them in ponds, using bread balls, small pieces of hot dogs, dog food or live worms. They are rarely caught on artificial lures.

The FWC encourages catching and eating most exotic fish, including blue tilapia. Because they are nonnative, there is no size or bag limit.

"Our goal is to ensure quality fishing throughout Florida both now and in the future," said Tom Champeau, director of the FWC's Division of Freshwater Fisheries Management. "Ms. Henry's support and participation in the FWC's Big Catch Angler recognition program will help us maintain Florida's reputation as the Fishing Capital of the World."