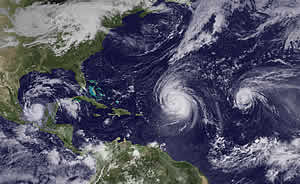 Hurricanes Karl, Igor and Julia (from left to right on Sept. 16) were part of the onslaught of Atlantic storms this season. Credit NOAA

SILVER SPRING, Maryland -- According to NOAA the 2010 Atlantic hurricane season, which ends tomorrow, was one of the busiest on record. In contrast, the eastern North Pacific season had the fewest storms on record since the satellite era began.

Large-scale climate features strongly influenced this year's hurricane activity, as they often do. This year, record warm Atlantic waters, combined with the favorable winds coming off Africa and weak wind shear aided by La NiÃ±a energized developing storms. The 2010 season continues the string of active hurricane seasons that began in 1995.

But short-term weather patterns dictate where storms actually travel and in many cases this season, that was away from the United States. The jet stream's position contributed to warm and dry conditions in the eastern U.S. and acted as a barrier that kept many storms over open water. Also, because many storms formed in the extreme eastern Atlantic, they re-curved back out to sea without threatening land.

"As NOAA forecasters predicted, the Atlantic hurricane season was one of the most active on record, though fortunately most storms avoided the U.S. For that reason, you could say the season was a gentle giant," said Jack Hayes, Ph.D., director of NOAA's National Weather Service.

Though La NiÃ±a helped to enhance the Atlantic hurricane season, it also suppressed storms from forming and strengthening in the eastern North Pacific. Of that region's seven named storms this year, three grew into hurricanes and two of those became major hurricanes. This is the fewest named storms (previous record low was eight in 1977) and the fewest hurricanes (previous record low was four in 1969, 1970, 1977 and 2007) on record since the satellite era began in the mid-1960s. An average eastern North Pacific season produces 15 named storms, nine hurricanes and four major hurricanes.