Taiwanese Couple Pleads Guilty To Illegally Trading Protected Black Coral; 'Their Conduct Will Not Be Permitted' 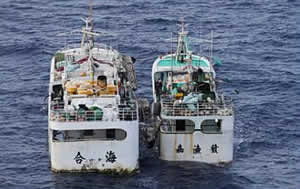 “Members of the Western and Central Pacific Fisheries Commission (WCPFC) must shut down all pockets of international waters to all fishing including longlining and ban the transshipment of fish at sea, which currently gives pirate tuna fleets the opportunity to keep plundering the Pacific Ocean,” said Karli Thomas, Greenpeace New Zealand oceans campaigner, on board the Esperanza.

Fishing vessels Her Hae and Jia Yu Fa were carrying tuna and shark fins, and were photographed while transferring tuna from one ship to another in a pocket of international waters between Papua New Guinea and the Federated States of Micronesia, an area proposed as a marine reserve. They abandoned their trans- shipment process and fled the area as the Greenpeace ship Esperanza approached the vicinity.

The Esperanza, campaigning to end the destruction of the world’s oceans, peacefully escorted the vessel Jia Yu Fa out of international waters and into the waters of the Federated States of Micronesia where it has license to fish. Greenpeace has reported the Taiwanese vessels’ illegal transshipment at sea to relevant authorities.

Pirate fishing by longline fleets is thought to be significant and is often facilitated by the transfer of fish at sea (2). A recent report estimated pirate fishing in the Pacific makes up an average of 36 per cent of the entire fish catch, which is much higher than the global average of 19 per cent (3).

Pockets of international waters in the Pacific, which are regulated by the WCPFC are known to be especially vulnerable to pirate fishing as previous Greenpeace expeditions in the region have demonstrated. The WCPFC has agreed to close two of the pockets to the destructive fishing practice of purse seining (4) from January 2010 but the areas will remain vulnerable to overfishing by longline fleets. (5)

“Time and tuna are running out. The WCPFC can become a global leader in oceans conservation by agreeing to immediately reduce fishing by half and by closing all four pockets of international waters in the Pacific at its summit in December. Unless it takes this action, the fishing industry will simply fish the Pacific to death.”

Longliners like Her Hae and Jia Yu Fa are part of a vast Taiwanese fleet of such vessels and mainly target bigeye and yellowfin tuna, destined for luxury sashimi markets. Many also fish exclusively in international waters where little regulation exists. Scientists have warned that both species are already seriously overfished and fishing must be drastically reduced (6). In addition, approximately 35 per cent of longline catch consists of non-target species, including threatened oceanic sharks and turtles (7). Many tuna longline vessels also engage in controversial shark-finning activities.

Earlier this week activists on board the Esperanza’s “Defending Our Pacific” tour located and confiscated a fishing aggregation device (FAD) in a prohibited area. FADs are floating devices that are used by industrial purse seiners to attract large schools of tuna, but also attract a host of other species, such as sharks and turtles, and juvenile tuna before everything around the FAD is scooped up in a huge net.

Greenpeace is campaigning for a global network of fully protected marine reserves, covering 40 per cent of our oceans. They are essential to ensure clean and healthy oceans and protect marine life from overfishing and habitat destruction. Healthy oceans can also play a vital role in building resilience against the devastating effects of climate change.

(1) The transfer of fish at sea is also known as transshipment. Authorities from the Federated States of Micronesia (FSM) have confirmed that their fishing license conditions do not permit vessels to transship at sea, unless an exemption is given to a particular fishing vessel. According to FSM authorities, Jia Yu Fa is licensed to FSM but does not have an exemption to transship fish at sea.

(4) A common type of seine is a purse seine, named such because along the bottom are a number of rings. A rope passes through all the rings, and when pulled, draws the rings close to one another, preventing the fish from “sounding”, or swimming down to escape the net. This operation is similar to a traditional style purse, which has a drawstring.The purse seine is a preferred technique for capturing fish species which school, or aggregate, close to the surface

(5) A map of these areas is available online at: http://www.greenpeace.org/international/campaigns/oceans/marine-reserves/pacific-tuna-need-marine-reserves

(6) Scientists have warned since 2001 that bigeye and yellowfin tuna are being fished beyond their limits, and this month the scientists of the Western and Central Pacific Fisheries Commission advised that a 34 – 50 per cent reduction in fishing was needed to protect stocks. Their warnings have so far not been heeded and pressure on stocks has not been reduced. The protection of the tuna stocks in the region called for by Pacific Island countries is jeopardised due to overfishing by large industrial fishing fleets from Asia, the US and Europe.